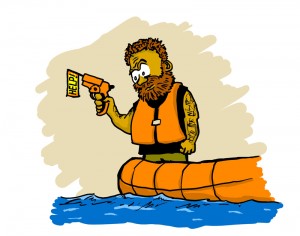 Within the past few months there have been a bunch of sea-related stories on the news that have made me want to shrivel up and deny I am a sailor. I guess I’ve just been back in civilization too long.

Well, it’s simple.  So many people are getting into this way of life with absolutely no notion of what it means to take the responsibilities for ones own actions.  You know…like when we were young, the good old scouts motto.  Be prepared?

I watched one TV “expose” of the Coast Guard.  Seems someone was suing them for not saving her family when they were involved in a shipwreck during a storm.

Suing them for not saving someone?  What up with that?  When you get on a boat and sail off into the sunset you are taking the responsibility to preserve your own life, and those of the people who have trusted their lives to your care.  That means you have to be ready for emergencies, not be ready to call for help.

Oh, don’t get me wrong.  I am not saying you shouldn’t call for help.  Not at all.  What I am saying is you should be prepared to handle emergencies.

I won’t go into particulars about what happened.  It was a tragedy, as people died.  But to sue the Coast Guard for not rescuing them makes no sense at all.

I have participated in multiple rescues of cruising boats in danger, and seen the Coast Guard go so far beyond their duty description as to render them as heroes in anyone’s book.

I recall in 1994, the Yacht Cinnamon rolled and lost its mast halfway from Hawaii to the mainland,  1,000 miles off-shore.  Yet the Coast Guard, upon hearing of the plight, sent a nearby fuel tanker to give them fuel, monitored them every day, and flew a plane out to drop needed supplies numerous times, escorting them in the last few hundred miles.

In 1995, in a Tehuanapec storm off Central America, a vessel we were about 300 miles away from called a Mayday.  The Coast Guard station in Maine heard the call, passed it to the Navel Air Station in Panama, who sent a plane to help.

In the northwest, three Coasties lost their lives attempting to save the lives of a small crew aboard a sailboat, in seas no one should have been out in.  These stories go on and on.

I have never heard of an event at sea where someone has asked for help from the Coast Guard and not received it.  I am sure I will now hear from people who have.  That’s not my point.  The point is, because of law suites like this, the Coast Guard will now be forced to go more “by the book.”  They will be told to stick to procedure in case someone might want to sue them.  As I see it, this will do nothing but worsen the relationship between sailors and Coasties.

I for one, hate to see that happen.

If you go out on a boat, you are taking your life in your hands.  Yeah, it’s fun.  It’s supposed to be, and I would be the last one to tell anyone it isn’t.  But that doesn’t mean you have to be stupid to have fun.  Once you are sure you have a good rescue plan for emergencies, and that you have the right equipment on board to be prepared in an emergency, have a ball.  But you must be prepared to take the responsibility for your actions.

We have all heard the stories about people taking off without the proper preparation, and if we hear about them and all came through safely, we laugh.  I recall one man who was saved with his three children.  They had left San Diego to sail to Hawaii.  The man thought it was just on the other side of Catalina, some 20-30 miles away, and left with a weeks food aboard, for what would actually have been a 2,500 mile, month-long crossing.  They were on a 22 foot boat and ended up 500 miles off the coast of Northern California, near dead.  His comment when rescued?  He was planning to go back and get the boat (it was left drifting at sea!) as soon as he was better, and try it again.

Folks, the United States Coast Guard is not there for our use.  They are there to guard the coast.  We, as sailors, must take it upon ourselves to prepare our vessels so we do not need assistance.  That’s why it is one of the last vestiges of true freedom.  And if we don’t start taking care of ourselves, our bungling lawmakers, in their infinite wisdom, will do the task for us.

I, for one, do not want the “majority” to make a bunch of laws to protect me from my blunders.  I feel I am capable of taking care of myself.  If you don’t feel the same, you shouldn’t be sailing in water deeper than you can walk back to shore in.

If, and/or when I don’t return from a voyage, it will either be due to old age or stupidity, but in either case, it will be my own.