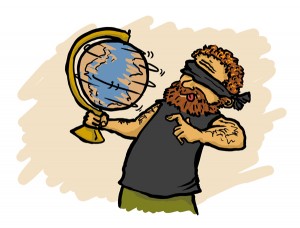 They say that variety is the spice of life.  Of course we have no idea who the heck “they” are, but that doesn’t matter.  “They” said it, and that’s that.  I’m not one to argue with “them.”  Of course not.  Hell, they may be bigger than I am.  So, in order to avoid conflict with a much larger and more ferocious being than I, it was decided that I would take their word for it.  I wanted variety.  I wanted spice.

So there we were.  Jody and I, and our trusty vessel The Lost Soul.  We’d been out cruising for about a year or so, and had made our way into and out of some of the most written about and photographed islands of the world.  For the past year we’d been hanging out in French Polynesia, the Northern Cooks, Samoa and Tonga.  They were all they were cracked up to be, and maybe a little more.

But we needed a little variety.  A little spice in our lives.  Being truly twisted individuels, we spun the globe we have in our main salon, and stuck a finger into it to stop it.

And thus was born our “little  jaunt” to get some Souvlaki.

Because of this little game we played, we had all of a sudden gone from lacsadaisicle hang-around boat-bums, to cruisers on a mission.  We had plans to make.  All of a sudden life was good and full.

Now don’t get me wrong.  Hanging around in paradise has it’s advantages.  I’d have to be pretty damned jaded to think they didn’t.  But after a couple of years, carefree drifting starts to resemble what I call aimless wandering.

Okay, so now half the cruisers in the world are about to descend on me with belayingpins held high.

Hey, what up wit’ dat?  You trying to make cruising look bad?

Nope.  That’s not it.  The truth of the matter is, after I’ve been out for awhile sailing in one area, I start to get bored.

Yeah, I know, thousands of people would give their eye-teeth to live that lifestyle.  You know, for years I liked pissing people off, just by telling them the way I lived.  It was almost as much fun as the lifestyle itself!

I remember when Jody and I sailed back to our home port in the Portofino Marina, Redondo Beach, California, after cruising Hawaii and the South Pacific.  Why? Well, in reality it was just to see the look in our friends eye’s when we told em; no, we weren’t going to stay.  We’d just sailed in to say “Hi” and were on our way to The Med.

Talk about numerous shades of green!  Envy was dripping off them, like oil from an old Harley, and we loved it.

Guess that’s not something one should admit to, but what the heck.  I never was one to mislabel stuff.  It was worth the 2,700 mile sail to come home and turn our friends green.  It was great.

But that wasn’t the only reason we did it.  There was a need for change.  We’d been cruising without a goal for awhile, and all of a sudden I got excited again.  Hey!  A trip to plan!

I needed new charts.  Bitchin!  I love charts.  I love the way they smell when you first roll em out.

And the thrill of finding just the right cruising guide.  How can anything compare with that?  It’s like a first date, one you got lucky on.

And then you get to live the adventure before you ever pull out of port.  You get to go over the trip, step by step, area by area, country by country.  You have to plan for the seasons, the best times to make crossings.  Where to provision.

Ahh, it’s pure paradise.  Your mind lives the adventure a hundred times before you ever even cast off a line.

I can recall how excited we all got as we decided that Greece would be our destination.  All the cruising guides were pulled out of their various insundry stashes, and the charts of Greece spread out on the salon table.  Then we all sat around, like a bunch of demented children, pointing at places that looked interesting, and where we wanted to go for sure.

The fact that we were anchored in paradise was all of a sudden forgotten.  The brilliant white beach laying just a hundred yards across the crystal blue/white water of an almost uninhabited lagoon in the South Pacific was no longer of interest.  We’d been there, done that, got the shirt.

And you know what’s really funny? (Funny peculiar, not funny, ha-ha).  A couple years later, as we were leaving the Med, after sailing the places we’d dreamed of and planned on, it was just as exciting planning to go back to the South Pacific, to see the people we’d met while there, and to see the places we’d missed.

The moral to the story?  None.  Cruisers are just weird.  Sail on.