It’s not what you see that’s important, it’s how you look at it! 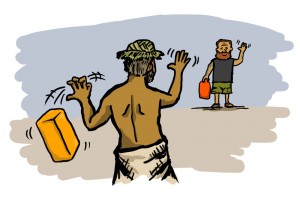 We had been anchored in the Lagoon at Fanning Island for a couple of days when we realized we were running short on Gasoline for our outboard.  The closest fuel was 120 miles away at Christmas Island.  We’d noticed a Land Rover parked under a tarp on our hike through the little village, which had seemed a little odd, since there were not only no roads, but not enough land on the motus to make one.  When we asked if they had any fuel they proudly pointed to a full 55-gallon drum.  It seems that the Australian government had given them the Land Rover and fuel as a gift, but they had no place to use it.

In a few minutes, they agreed to trade some canned goods and food for five gallons of gas.  I hurried back to the boat and started to gather some goodies.  I knew they hadn’t seen a supply ship in over a year because we had been asked to bring some bags of rice and flour with us from Christmas Island when we sailed in, so anything would have been welcome.  I wanted to give them the better end of the deal, so I dug deep into our supplies.  I came up with some canned peaches, pears and fruit cocktail. Then I added some corn flour, canned butter, and salt.  A couple cans of Spam were added to the mix (to them it was like a side of roast beef) and also an extra few pounds of sugar.  We gathered some balloons and an extra frisbee we had for the kids and some hair ribbon for the women.  It was a good package.

But I wanted to do a little something extra to let them know how much I appreciated the fuel, so I dug deep into the bottom of the refrigerator and brought out a five-pound brick of cheddar cheese.  We loaded everything into the dinghy and headed back to the village.

Our arrival was like a party.  The entire population of the village, all ten of them (OK, so it was a pretty small place) were there to help with the dinghy.  We walked over to a tree stump and started to lay out the goodies.  Their eyes lit up when we pulled out the canned fruit.  They got even more excited when they saw the sugar and butter, and when the kids saw the balloons they squealed with delight.  Meanwhile, the women were busy dividing the hair ribbons.

Then it was time for the pièce de résistance.  The cheese.  I pulled out the brick and handed it to the matai of the village.  He looked at it for a second as if it were from another planet, smiled politely, and walked us to the gas can.  I was actually a little disappointed that he hadn’t gotten a little more excited.

We siphoned the gas and headed back to the boat, as the kids played on the beach with the balloons. The rest of the day was spent wasting our newfound gas.

That evening, just at sunset, Father Bermond, the priest for the Line Islands came to call.  We’d given him a ride over from Christmas Island and he was staying on board.  He was grinning real wide and shaking his head.

“Well, you know that cheese you gave the head of the village?” he asked.

“Yeah, it was cheddar.  I thought they’d love it but they just looked at me real weird when I gave it to him.  Do you have any idea why?”

“As a matter of fact, I do,”  He waited a second, and then went on, “Have you seen any cows on any of these islands?”

“Well, the old boy waited until you left to check out what you gave him, because he had no idea what it was.  Once you were back at the boat, he and some of the other villagers tried to open the plastic wrapping.  When they finally cut it the pure rich aroma of a fine cheddar cheese wafted up to them.” He smiled again, and then went on.  “They thought it was something that had gone bad.  They took it out back and fed it to the hog.”

Of course, Father Bermond was more than merely bemused.  It seems that, being French, he just loved cheese, but hadn’t had any in a very long time. That night, over a big bowl of macaroni and cheese, we had a big laugh over it all. But there is a point to this story.

In order to understand people, you need a common ground. Sometimes we just take for granted all that we see, and have seen, as we cruise the world.  In order to more fully enjoy it, we have to take the time to “get inside the head” of the peoples we visit. What more joy could there be than introducing a remote islander to ice cream, or the magic of seeing himself on video tape? It’s the little moments like this that make cruising the best way of life on earth.