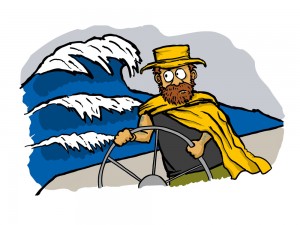 You’ve just pulled out of Gibralter and headed around the southern tip, on your way to Ibiza, Spain.  Your significant other is down below, and you’re on watch.  You stand holding the wheel watching the ships that squeeze through the bottleneck at the straights of Gibralter, and wonder, “How many centuries have men felt this wonder?”  In front of you is all the history you have read about, and you are about to discover it for yourself, at your own pace.  An unsurpassed feeling of anticipation fills you.

The boat is going to right itself.  The fifty-foot wave that just broke over you slammed you down a bit, but the boat took it, and is popping back up just like it’s supposed to.  You tighten the main sheet to where it should be, and check the reef lines.  Everything is okay.  You hollar down to the crew below that it’s over, and then it hits you.

What if the wave had been bigger?  What if the stay’s hadn’t held?  The mast could have broken!  Or the keel bolts broken off!  What then?  The boat would have capsized.  And what if the safety harness hadn’t kept you in place when the wave hit, or, God forbid, what if you hadn’t put it on?  Look behind you.  There is nothing back there, and you wouldn’t have been missed for an hour or so.  At least until the next person was going to come on watch.  Can you imagine what that would be like?  Treading water and watching the boat sail off without you?

It always seems to come after the worst is over.  During the storms, the ordeals, or the tight reef entrances.  But when it’s over.  That’s when it hits. Fear!  Gut wrenching fear.

Your arrival in the Marquesas was supposed to be after 22 days, and here you are, pulling in after just 18 days.  The storms that pushed you were hell.  The rain seemed to find every place that leaked on the boat, and you were really getting pretty tired of trying to find a dry spot in the bunk.

Beans and cold stew had been your meal more nights than you might have hoped, and the auto-pilot going out at the halfway point didn’t help much either.

But there, in front of you.  Nuku Hiva!  Look at the spires.  The harbor looks like heaven.  More colors of blue in the water and more colors of green on the hills than you even imagined, and you are here on your own boat.

You’ve done it!  As you look at the small tear in the mainsail, a feeling sweeps over you.  You prepared your boat to the best of your ability.  You planned for the storms, and the fuses that went out, and the wet weather.

And now you are pulling into your first South Pacific paradise under your own power.  The storms, the seas, the 2,800 miles behind you seem like nothing.  You can’t help but smile, as you wave to a passing cruiser who is heading out of the channel.

“Yeah!” You say to yourself, almost aloud.  “Yeah, I made it.  The boat made it.  The crew made it.  And only a handful of people on Earth can ever say they have accomplished such a feat.

The feeling is so strong you almost feel a chill.

Pride.  The pride of conquering unknown peril to accomplish a goal.

The squall hit late at night.  Your wife was on watch, and she hesitated to wake you, but the sails had to be reefed, and it takes two.

Since she’s on watch she feels it’s her place to go out and handle the reeflines, so you turn the boat into the wind to let the sail luff, and watch as she ties each line.  All the miles behind you, and she still has the same feeling for the boat.  And for the lifestyle.

She finishes tying the lines and gives the high-sign.  Everything is okay.  You turn down wind to fill the sails, and adjust the sheet line.  The rain is coming down hard now, and as you look up you see her walking between the house and the lifelines.

It had been warm on her watch, so she was wearing a bathing suit.  Then the rain hit so she has a poncho on.  You look up from the winch and she’s standing there, rain running down her face, with the biggest grin you’ve ever seen.  Your heart melts.

There is no other lifestyle on this water-planet that can evoke such feelings, such depth of emotion, as cruising.  The challenges that meet you only make them stronger.  Being in charge of your own destiny becomes a way of life, and most cruisers find, if they ever stop cruising they can’t return to their old lifestyle.  But then again, who the hell would want too?

Under The Sea With Hannah Mermaid (27 Pictures)