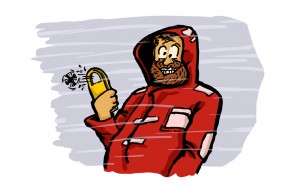 It’s not the Latitude that’s important, it’s the Attitude!

Many years ago I learned that “Attitude is the difference between an ordeal and an adventure.” In the 15 years since then, we cruised the world and loved every bit of it. Never has a saying held more truth. Put two people on a boat and set sail across an ocean. After the storms and high seas and squalls that will inevitably hit are history and the boat arrives at its destination, one person will say how awful it was because of the bad weather and storms,  the other will be ecstatic after experiencing one of the best adventures of his life. The difference? Attitude. Nothing more.

An acquaintance was a yacht broker in my harbor; she saved for years with her boyfriend to go cruising. They lived aboard their Sea Wolf 41 Ketch and put every dollar into outfitting it with the best equipment. One summer they had enough to head out, and they did.

A month later they arrived in Cabo San Lucas, Mexico, some 800 miles south of their departure  port. They sold their boat and moved to Colorado. The letter they sent of the trip south sounded like an ordeal from hell…gales off of Cedros Island, untenable anchorages and constant winds over 25 knots.  It was awful.  It was also typical weather for that area, and everyone heading south experiences the same. I can recall the thrill the first time my old Formosa 51 hit 11 knots in the gale off Cedros.  What an adventure!

It’s easy to understand their problem. All the sailing they had done around their home port, where, when the wind would blow over 20 knots the small craft warnings would go up. All their sailing had been done in 10-15 miles per hour of wind and three to four foot seas. All of a sudden they were in the Pacific Trades. Twenty-five to 30 miles per hour is standard. Seven to eight foot seas are the norm. They weren’t mentally prepared.  In other words they had left with a wrong attitude!

Before you set sail be sure it’s what you want to do. What I recommend is to join friends who are cruising if possible, or to charter a few times to make sure before you sell everything you own and sail off into the sunset, only to come home disillusioned a short time later. Cruising is a great adventure if you have the right attitude, and an ordeal if you don’t.