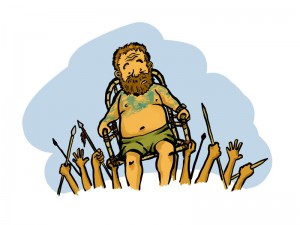 I really didn’t know what to think.  After we entered the harbor at Fatu Hiva in the Marqueses, we pulled in as close as we could to shore and set our hook in about 30 feet of crystal clear water.  The harbor was surrounded by lush green hills and over a dozen colorful outriggers were anchored in the bay.

We’d timed our arrival well; the sun was just setting as the snubber line was attached to the chain, and we sat back with a cold one to celebrate another great day of sailing in the South Pacific.

All of a sudden we heard some voices, and two outriggers were pulling alongside the Lost Soul.  My first thought was to reach for the machete I keep by the nav-station as it was closer than the shotgun buried in the aft cabin.  Just before my hand closed on the haft of the long, cold blade I saw a smiling face looking over the rail.

Six young men filled the two canoes.  They were all large, and covered with tattoo’s.  My first thought?  We were about to meet our first real-life pirates.  This was from years of conditioning in a civilization that has bred violence as an artform.  But then it hit me.  I’m not in civilization any more!  This is polynesia, and tattoo’s don’t indicate anti-social behavior, but are a sign of stature in the community.

Soon the six would-be attackers were sitting around the aft deck, singing some of the local songs and accompanying the songs with ukelele’s they’d brought and a guitar we had on board.  They had rowed out to welcome us to their island.  A polynesian custom older than any can remember.

We listened, laughed and even sang them a few songs from our home “island.”  You know, some Buffett and Beatles stuff.  Even though none of them spoke a word of English, and none of us a word of Polynesian or French, we spent two hours getting acquainted.

As they sang I broke out my video camera and filmed the intercourse between our crew and theirs.  The songs, the smiles and the hand signals were almost comical.

In fact, it was so comical I figured they might like to see the video.  After they’d finished their songs we indicated they should come below, to see the video on the T.V.

Once below they gazed around the Lost Soul in wonder.  I flipped on the TV and plugged the Video recorder into it.  In a couple of seconds their singing filled the air, and there they were in living color.

They sat there as if spellbound.  Then one of them recognized his friend on the screen, and he started to giggle.  They talked excitedly between themselves, and couldn’t stop giggling.

It seems this was the first time they had ever seen a television set.  The fact that they were starring in the video didn’t even hit them until after the first few seconds of being shocked at seeing full color moving photos with sound.

You see, being a typical ugly American, it hadn’t even dawned on my alleged brain that these guys had never seen a television.

In the next few days we were greeted each morning by two or three of our new friends, and they would take us to find particularly good fruits and vegetables growing on the island, and one day they led us to a beautiful waterfall in a small valley a couple miles from where we anchored.

In the days that we stayed there we got to know our new “friends,” even though we couldn’t speak to each other in words.  It wasn’t even a problem after awhile.  You’d say what you wanted to say and they seemed to understand, and when they spoke to us we would just seem to “get it.”

In the ensuing months, which turned into years, we would meet other people who we would get to know, in spite of the language barriers.  But none had such an impact as the first meeting, there in Fatu-Hiva, where I first realized that the most civilized people on earth are those we tend to call uncivilized.

Back To My Roots

Bob Bitchin’s Granddaughter Ready To Take On The Outback – And...