Weather at the end of September in NW Scotland can often be cold, wet and windy. Ullapool where my friend keeps his boat is roughly 58 degrees north. Fall often starts very early here. We had intended to go sailing for few days earlier in the summer but a whole variety of things (including having to fit a new engine) had conspired against us.

During the five hour drive from my home in Argyll whilst listening to the inshore waters forecast. Then slowing down to avoid large herds of deer down from the hills in the dark as I got closer (perhaps warming up on the tarmac!). It was relieving to hear that all the ‘weather gurus’; thought only light southerly winds could be expected.

Adrian keeps his 25ft boat afloat all year round at Loggie Bay, Loch Broom. Partly because ‘Sally’ was build of wood in 1937. He rightly feels it’s much better if she stays ‘salty and wet’. Out of the water in the winter here a yacht could be blown off her cradle; just as easily as breaking her mooring and going ashore. Extreme gales often occur here making it a stark choice!

Trees grow here, but not on the top of the hills which remain bare. Compared to Argyll where I live which is a wet temperate rain forest. Or as one Scottish comic said ‘they’ve stolen our hills now, covering them with tree plantations’.

The following morning travelling on the road to Loggie we drove past a Buzzard. Tame enough to wait until we were just a yard away, before bothering to take off from its perch on the fence. Reminding me that parts of the Highlands are some of the least populated areas in Western Europe. It is very beautiful…

A pleasant walk downhill across the fields brought us to the bay. Adrian mentioned there are signs that this spot had been used by fishermen over countless generations. Possibly as far back as the Vikings. Rowing out to ‘Sally’ neither of us could believe how much we’d lucked out with such glorious weather.

I was keen to see how a famous ‘Vertue Class’ yacht sailed; compared to the similar size Dutch Kroes ‘Jupiter Class’ that we’d owned for many years. ‘Sally’ was the first Bermudan rigged Vertue (No.2). This class became very admired in UK in the 50’s and 60’s. Many pioneering small boat ocean crossings had been completed by well known sailors like Humphrey Barton, David Lewis etc. 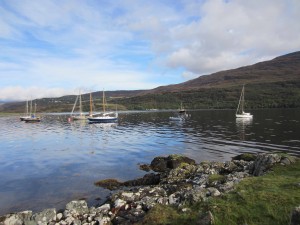 Sally’s rig was fascinating; she was neither a cutter nor a sloop. What used to be called a ‘Slutter’ (could be either cutter or sloop!)? She was rigged with a big loose wire-luffed Wickham-Martin furling Yankee jib. This was hoisted forward of the masthead forestay; and had an inner forestay (on a highfield lever) which could be detached.

This rig gives great flexibility; in light airs she could be sailed as a sloop with just the masthead furling Yankee. It could be furled away in stronger wind and a Genoa (or No.1 jib) hoisted hanked onto the outer forestay to maintain good luff tension upwind. Or revert to being a cutter with conventional hank on jibs and staysail on her inner forestay.

As the wind strengthened further the jib could dropped. The tiny staysail (or storm staysail) would then do the job. Bringing both main and foresail close into the mast, as well as lower, this works very well.

The Bermudan mainsail was totally conventional for her time; it reefed by rolling round the boom with heavey bronze fittings. This sail could be made very small.

Due to having a tall mast on a narrow beam the rig had two sets of spreaders, twin lower shrouds; and also running backstays to support the mast at the upper spreaders (when in cutter mode); as well as a backstay on a little bumpkin. Seeing this amount of rigging on a 25ft yacht. It pays to remember that she was designed by Jack Giles in 1936. ‘Belt and braces’ was the order of the day back then. British boats were made bomb proof, designed to stay at sea in all weathers!

It was going to be interesting to compare ‘Sally’ with our similar sized Dutch boat ‘Blauwe Slenk’. She also had a tall wooden mast designed as a North Sea cruiser/racer in ’47 by Gait Kroes. Her rig was more conventional; he had opted for a three quarter rigged sloop. (Small fore triangle and large slab reefed mainsail). One set of mast spreaders, twin lowers, jumper struts (preventing upper mast pant!), a backstay; but no running backstays.

We dropped the mooring and motored out with a light sea breeze just building in the warm sunshine. Then made sail and started tacking gently out of the loch using a full main and un-rolling the Yankee (which had to roll up each time we tacked).

Unlike most modern yachts ‘Sally’ was so well balanced that the helm could be pegged. She would sail herself upwind in steady wind for a long periods of time; our Dutch boat was similar. This trait seems to have been completely lost on modern flat bottomed, fin and balanced rudder yachts. It’s very useful for a cruising boat.

The light breeze tended to switch off and on making our progress slow out of Loch Broom. With a good height of tide Adrian suggested heading north towards St. Martin’s Island for lunch. Through a shallow gap given by a transit; it was easy to spot by the line given on the GPS plotter!

Adrian mentioned Ullapool had become a somewhat favourite place for several long distance sailors to base themselves. ‘Iron Bark’ a 35ft steel cutter was in Loch Canaird close to here. Her New Zealand owner Trevor Robertson had spent a winter in Greenland with the boat.

We had a leisurely al fresco lunch in the cockpit moored alongside a pontoon on the east side of St. Martin’s. Continuing to compare notes about the two boats. There was no doubt in my mind that ‘Sally’ was better constructed than our Dutch boat. ‘Blauwe’ was built by Gerrit at Kampen on the Ijsselmeer during the period of austerity after the war in ’57.

Gerrit Kroes built lovely strong mahogany on oak clinker yachts. Gait his son had experimented with six of his ‘Jupiter’ designs. Building composite galvanised iron frames and a strong cage around the tabernacle stepped mast (I’d had to replace these frames and some timbers). They allowed the rig to be set up harder and this class won many races. But when I met Gerrit on the Hamble (many years ago now) still cruising aged 94! After all our hassle replacing them, he felt that these frames weren’t strictly necessary for cruising!

‘Sally was built by Elkin’s twenty years earlier than ‘Blauwe’ with grown oak frames and two steamed timbers between each frame. The first owner Mr Sharp asked the yard to replace the galvanised floors and put in Tungum Bronze during the build. Sally’s owner (previous to Ade) had replaced her deck and cockpit.

Maintenance for Adrian must be easy; in his second life he’s a brilliant clinker wooden boat builder. We’d had the deck replaced then Cascovered on ‘Blauwe’ and a new top section scarped onto the stem. I’d fitted new galvanised floors and frames.

After lunch we decided to continue beating north round St Martin’s in the westerly wind. Experimenting by using the working jib hanked onto the outer forestay, as well as unrolling the Yankee and a full mainsail. This sail gave us an extra half a knot upwind. Unfortunately shortly after rounding the island and bearing away towards Ullapool the wind began to die.

This completely exonerated our decision not to go to the Summer Isles. We motored back into Loch Broom spending a flat calm night on a mooring off Ullapool. Then we enjoyed diner in Sally’s traditional white paint, varnish and dark blue cushion covered cabin. Gently warmed by her charcoal heater and a glass of wine.

Once again awakened by a stiff back (it happened on Blauwe, too). Letting me know I was sleeping on small wooden boat again! Whilst the weather folks mentioned on the radio that Britain had just experienced the driest September since 1910.

Yesterday’s sail had been quite nostalgic for me, and all thanks to Adrian. We’d been extremely lucky to have light winds and sun supplied by the weather Gods.

Hang Out With Outposters (43 Pictures)

Dinghy Etiquette – A Tender is a Boat