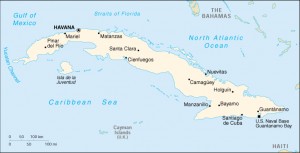 Short Answer: Soon it looks like we are well on our way to sailing free and easy to Cuba…but not today. Soon.

Any American knows the key moments in the long, antagonistic history of U.S. – Cuba relations.

Fidel Castro’s revolution and turn to communism. The Bay of Pigs. The Cuban Missile Crisis.

But those moments illustrate just how long it’s been since there was any significant change in the relationship between the two countries. It’s stunning to consider that the last moments of major change were recorded in black and white. They’ve moved from high school political science classes to history lectures.

What we’ve seen over the 50 years that have passed since those days have been only small, incremental changes, the kinds that barely registered outside this Cuban-dominated city. President Carter opening an “interests section” in Havana in 1977. President George W. Bush restricting the already-limited travel opportunities for Americans to the island. President Obama reopening those travel channels after he took office. Even the 2008 transfer of power from Castro to his brother Raúl appeared to have little impact on the standoff.

That’s why Obama’s announcement Wednesday is so historic.

The swap of American contractor Alan Gross and a U.S. intelligence operative for three Cubans jailed in the USA was big enough. But the president threw on top of that the re-establishment of formal diplomatic relations, a plan to open a full embassy in Havana and expanded opportunities for Americans to do business with, and in, Cuba. As legend has it, President Kennedy was the last American to legally purchase Cuban cigars and smoke them on U.S. soil. Now you can bring some cigars and Cuban rum back with you on your direct flight from Havana to New York City. The wisdom, and legality, of the president’s moves will be hotly debated in the years to come. But people on both sides of the debate recognize that we’ve entered a new world. There are the hard-liners, who insist that maintaining the embargo on Cuba — which remains intact because it’s anchored in an act of Congress — is the only way to destroy the repressive regime. “It is the biggest set of concessions that the United States has ever given to the Castro regime,” says Rep. Mario Diaz-Balart, R-Fla. And there are the younger generations of Cuban Americans who feel that providing more resources and support to the Cuban people is the only way to topple the regime.” This is the biggest change in 50 years,” says Ric Herrero, executive director of Cuba. Now, a group that has pushed for more engagement with the Cuban people. “These are not concessions. They are expanding the flow of contacts and resources between American civil society and the Cuban people, which empowers them and puts them in a much stronger position to demand bigger changes on the island. “However you view Obama’s move, whether you think it’s right or wrong, that it’ll strengthen the Castro brothers’ grip on the island or lead to their downfall, one thing is clear: it has finally moved U.S.- Cuba relations into the 21st century.

In 2012, the United States’ Dept. of the Office of Foreign Assets Control (OFAC) introduced the “People to People” educational exchange general license which allows U.S. tour operators to take groups of American travelers to Cuba. In 2013, the number of licenses increased to over 400 and now any American University can get a license and all alumni can travel on that license. By 2014, American tourists were travelling in all parts of Cuba–including the remote coastal ports and famous diving locations on the south coast — Jardin de la Reina (Queens Garden).

In the past, U.S. Coast Guard cutters vigilantly patrolled 12 miles off the Cuban Coast. These patrols hailed all vessels regardless of flag nationality of crew and were questioned as to where they were heading, passport details and, in some cases, vessels were boarded. Since 2011 there have been no USCG patrols off the Cuban coast. At one time, U.S. vessels that were docked in a Cuban marina would be situated in a less visible location so that no one could photograph them. Today, U.S. flagged yachts tie among the other vessels and have no special dockside treatment. American passports are still not stamped upon entry.

Halloween Around the World