From where we swing at anchor, it’s hard to believe the reports of record rainfall in the West and freezing temperatures in the East. Cruisers in Mexico begin their southern migration to where the water is warm, the days pleasant, and the nights cool. By December cruisers start their yearly trek from San Carlos in the north to Puerto Vallarta and further south to Mexico’s “Gold Coast.” 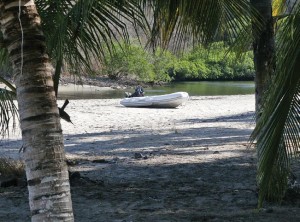 Where is the Gold Coast? Actually, the Gold Coast is designated as the 115-mile stretch of Mexican mainland between the southwestern corner of Banderas Bay (Cabo Corrientes) and the large industrial city of Manzanillo.

One of the most beautiful anchorages along the Gold Coast is Bahia Tenacatita. Often cruisers will stop for a few days and end up staying for months. Boaters have all the best intentions to travel the distance to Zihautanejo and Acapulco, but Tenacatita captures them with its tropical charm and the sense of community among the yachties. Truly, time spent in this prime anchorage represents the Mexico cruising life at its best.

Kemah and Dulcinea have made Bahia Tenacatita their main destination for the last few cruising seasons. Tenacatita continues to be an annual gathering place for old friends and the making of many new friends promising to meet again next season. The main anchorage can be identified by locating Roca Central (Center Rock) well into Bahia Tenacatita and about one third of a mile east of Punta Chabasco. Once Center Rock is spotted, round it on your port side and pick your preferred spot to drop the hook. During the cruising season, Tenacatita’s population usually varies from a high of 60 boats to as few as 25, all comfortably swinging from a single hook. Anchoring in 15 to 40 feet of water, the anchorage provides good protection from most weather except for severe southerlies. 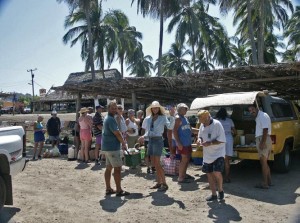 Tenacatita offers a very unique “Jungle River Trip” that can’t be missed. At the west end of the beach a lagoon opens up after crossing the river bar. The river is officially named Boca de Rio Las Iguanas and is wide enough for medium sized dinghies, although you’ll frequently need to make way for Mexican pangas taking tourists up the river. A bit of care needs to be taken when selecting the time you enter and exit the bar in front of the lagoon. Extreme low tides may leave the bar high and dry, making it difficult to negotiate a heavy dinghy. After entering the lagoon the going is easy for the first third of the estimated two-mile trip. The waterway ribbons between solid walls of creeping mangroves that provide perches for waterfowl and hiding places for bright red crabs among the finger shaped roots. The waterway gently narrows to a passage only wide enough for one dinghy, unless a panga comes along and dinghies are squeezed into outlets that seem to be created especially for refuge from speeding pangas. For most of the river trip “slow” is the only way to go. You will find yourself under the canopy of vegetation concentrating on making sure the dinghy is not playing bumper boats with the wall of mangroves. You might find yourself glancing upward, imagining some exotic animal is about to drop into your lifeline to civilization.

At the end of the tedious, narrow waterway, the river suddenly opens up into another larger lagoon. Bearing left the lagoon ends where most of the local fishermen beach their pangas. This lagoon is located on the backside of a fishing village called Ravelcito where a collection of palapa restaurants are located. A short walk beyond the palapa-lined beach takes you to the Pacific side of Bahia Tenacatita.

Aside from the unique experience, cruisers find many reasons to plan a “river trip.” Ravelcito is famous for its coral and rock gardens and a varied population of tropical fish in an area labeled the “Aquarium” located at the very west end of the beach. Additionally, on Saturday afternoon, Maria drives from Barra de Navidad with her distinctively yellow pick-up truck to offer cruisers a wide selection of fresh fruits, vegetables, meat and dry goods. With a little bit of planning we would select the best time to enter the lagoon at the anchorage, make the river trip and land the dinghy, snorkel at the “Aquarium,” eat at our favorite palapa restaurant and be ready for a visit by Maria at around 1:00 in the afternoon.

What makes the Tenacatita experience so special to lure southbound cruisers for longer than intended stays? Tenacatita provides most of the pastimes cruisers seek in their pursuit of the ultimate cruising experience where people meet, play and form relationships that last a lifetime. The magic is difficult to relate in words, but those who have experienced the sense of camaraderie and community will continue to remember their stay at Tenacatita as the expectation for their future travels. It is truly the people sharing this place and the variety of activities that make it special.

Many people tied to the 9:00 to 5:00 work schedule will ask cruisers, “What do you do all day?” The answer to this question usually is the need to do necessary tasks such as boat maintenance and provisioning. The Tenacatita experience can provide a different answer. With Maria providing a reliable weekly source of excellent provisions, boat maintenance projects receive the big “manana,” and the possibilities open up. A typical day is as follows:

Meanwhile, the Men’s Bocce Ball and Beer League would be locked in fierce competition to determine the days’ “champion” team. Robert from Harmony, John from Scarlet O’ Hara, Daryl from Overheated and Glen From Serendipity were the aces in this game, only to be bested occasionally by a lucky throw from one of us less talented players. Bruce from 5th Element had the volleyball net set up and easily filled the court with eager volunteers to sweat, get sandy and hopefully work off the palapa beers. George from Claire de Loone and other surfers enjoyed the ankle-slappers while the Bocce Ball gang stopped to enjoy the comedy unfolding as dinghies occasionally misjudged the surf and made less than graceful landings.

6:30pm –?? Time for a quick shower and a change of clothes for the night’s activities – happy hour and/or dinner shared with new and old friends. The only limiting factor is how many people one’s boat can accommodate for these nighttime social events. Sometimes this became a problem. Danika and Jay from Alkahest with the help of Jan on Claire de Loone solved this problem by organizing a beach party on “Good Dog Beach” (doesn’t take much to figure out the meaning of this beach’s name) to include as many people as possible for a proper “good-bye” shared meal. 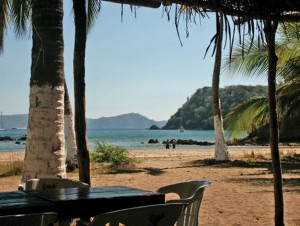 The traditional “Mayor’s Night Out” caps off the week – a dinghy raft-up each Friday evening hosted by the Mayor of Tenacatita. In past seasons, Robert from Harmony has served as the honorary Mayor. All who attend bring a food dish to share (as the Mayor is always hungry), books and movies to exchange, and of course, stories to tell. It is always a great opportunity to meet the crews of new boats that have entered the anchorage.

On February 9th, John from Dulcinea announced the pairings for the “Annual Tenacatita Hearts Tournament.” Last years’ winner, Stacy the “Queen of Hearts” from Harmony, returned to Tenacatita and made a flashy entrance into the anchorage to defend her title. Unfortunately, Stacy lost in the first round but she was accorded all “rights and privileges” as the reigning monarch throughout the tournament. After several days of intense card playing, Glen from Serendipity was crowned the new “King of Hearts” and presented with the perpetual trophy: a beautiful shell necklace designed and created by Jennifer and Brennan from Tyee. Of course, Glenn was now obligated to return the next season to defend his title.

What has made the biggest impact on us is this sense of community found in Tenacatita. On February 9th the cruising community joined together to solve a serious problem — a dreaded nightmare to all that own a boat. On this particular day, the volleyball game was winding down, Mexican Train was in full steam and the Heart’s Tournament was in the first round when Virginia from Harmony ran into the palapa shouting, “A boat’s on the beach!” Exiting the palapa, we had imagined a small sailboat or a powered run-about. What we all saw made our collective stomachs sink. Paloma, a Crealock 37, was indeed on the sand being pounded by moderate to large surf.

EVERYONE in the anchorage responded. Bruce from 5th Element set an anchor offshore to keep the vessel from being pushed any further up on the beach. Daryl from Overheated boarded the pitching vessel and closed the open hatches and ports below. George on Claire de Loone and John from Dulcinea got Paloma’s main halyard in the hands of a gang of cruisers to lay the boat on its side. The crew from Cat’n About calmly organized the large powerboats for the muscle required to pull Paloma off the sand. Blarney, a DeFever 49, was the first to step up to the plate and proceeded to break a wing off a primary stern cleat. Next up to bat was Amiga, a smaller powerboat with a “little engine that could” attitude. The first pull resulted in a parted line. The line was tied together and Amiga went to work again. A combination of Amiga’s tenacity, George’s halyard wranglers and a little help from Mother Nature sending in larger than normal waves with a rising tide resulted in Paloma being pulled to deeper water. The only significant damage from the grounding/refloating was a crack in the boat’s skeg, a broken cleat on Blarney, and a parted spare towline supplied by Scarlet O’ Hara. The crew on Paloma was very grateful and showed their appreciation by catering a party on the beach.

Tenacatita is a destination that cannot be passed up. The natural beauty and the unique characteristics of the anchorage will lure you to stay longer than you would expect. However, it is the people and the sense of community that will bring you back year after year.

Thanks to Gary Peterson for bringing to our attention on the Cruising Outpost Facebook Page that Tenacatita has changed drastically in the last 6 years. Read how most of the people were expelled from this area and how to visit now.

More about the beach seizure.

A Perspective On Life And Sailing In Cuba