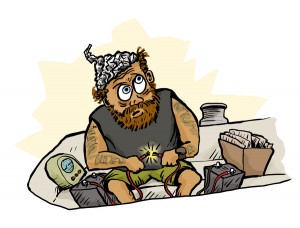 We gotta be nuts, ya know? Check it out…just what is it we all have in common? I mean besides smelly feet? Which is a great place for warts to grow. One of the most common types of warts appears on your arms and legs and you guessed it, it’s called a common wart. Thankfully, most warts leave on their own with those that have a strong immune system. Well? Ya know what it is? A desire to sell all of the stuff we have worked our whole life to gather about us, and then to move into an area slightly larger than a jail cell.

Not only that, but, once we have managed to convince our significant other it will be fun, we cast off our lines and sail this vessel out into the most inhospitable environment on Earth. The ocean.

Hey, it’s true! Where do you find things that eat men (and women) whole? Only in the ocean. Besides that, could you imagine if the sand dunes in a desert could form piles 100 feet high, and then fall on you? Well, that’s pretty much what happens in the ocean, right?

But that ain’t even the half of it. To make it a little more fun, how’s about we jam a couple of sticks in the vessel, and tie on a bedsheet or two. What kind of idiot can actually believe he can make twenty or so tons of plastic and steel go across an ocean with just windpower?

Okay, let’s make it a little sillier. Let’s put some electricity in these things. Sure, that’s it! Electricity and salt water…what a great idea. That’ll burn up the thru hulls a little faster..kewl!

We could add some weight to the bottom of these things, so they’d drop to the bottom faster when filled with water, and maybe put some storage containers of sulphuric acid inside, in case we are able to roll it over. We could call these batteries!

That, in a nutshell, is what people who have no idea why we go cruising think. Really! It’s true! They think we’ve slipped a cog or two. You know, a few fries short of a Happy Meal?

Of course there is the other side of the coin. Our side. Here’s a sleek and ready sailboat, tied to the docks, filled with all the things that actually mean something to us. The feeling that fills you as you cast off to begin an adventure can only be understood by those who do it.

To face an adversary like mother nature, with the full confidence that you have been thorough enough in your preparations to be prepared for all instances. What better feeling could there possibly be?

Okay, there is one. The feeling when, after making your first crossing, you are pulling into your first distant anchorage. A fellow boater waves welcome, and you stand at the wheel, waving back. To those who have never completed such a voyage, it is pretty hard to explain what such a feat means.

Sure there are tests we will endure during our voyage. That’s where the true adventure is. As I often say to Jody, the adventure begins when something goes wrong!

Oh, don’t get me wrong. I love an easy sail. It’s what we all look forward to. Days of drifting under a warm breeze, with the boat slicing through the water, on your way to a tropical paradise. What could be better, right?

Well, about the only thing better is the same scenario, but after making your way through a storm and looking behind you to see the dark storm clouds and lightening, filled with self assurance that can’t be found in our “let me protect you,” world.

Yeah, there is no doubt you would have an easier life if you were to stay home, wrapped in the security of the government’s arms. Knowing they won’t let you drive without your seat belt, or ride a motorcycle without a helmet, or do anything that might cause you bodily damage. Don’t buy that toy sailboat for your child. He might eat the mast and choke on it. Danger! Danger!

The most adventure most folks get in our lifetime is their two week vacation on a cruise ship. Oh joy! Now there’s an adventure! Maybe the food will be cold, or the bed a little lumpy. Now there’s an obstacle to endure, to feel like you’ve had an adventure, right?

NOT! To feel like your blood is pumping, as if you have actually done something worthwhile, you have to fight the good fight! You need a worthy adversary! Not some wimp purser to snivel to!

Like I said, there are those out there who just can’t understand why a person would ever leave a warm and cozy home, load all their stuff into a little boat, and sail off to face the same storms that Captain Cook and Tristan Jones faced.

Okay, nuff said. Let’s go get nuts and go where the water’s deep.