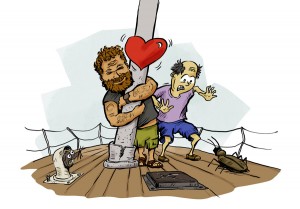 What is the perfect cruising boat? I don’t know how many times I’ve been asked that question. The answer is, there’s no such animal. Unequivocally, period.

Now there are people out there who really like what they have, but, if you’ll notice, they are always in a state of flux.

Did you ever meet a boater who wasn’t working on something to make his boat better? Of course not. It’s a way of life.

I remember about 15 years ago, when I had a boat I was pretty much happy with. I didn’t have any projects going. No improvements in mind. I was just sailing it and enjoying it. Her name was Predator, and she was a Formosa 51.

Right about now “performance cruisers” are chomping at the bit. “A Formosa 51! It won’t get out of it’s own way!” they shout. “It won’t sail tighter than 50° on the weather!” they scream.

Yeah. So? What’s your point? Maybe I didn’t want to go fast. Back in those days I had plenty of time to get there, so I was happy.

But one afternoon I was sailing into port, feeling pretty spiffy, as we turned on the wind and dropped the sails smartly. Billy Jack dropped the headsail, Gina dropped the Mizzen and I dropped the main, like clockwork. We were looking good! We had spent the previous week laying on some varnish, and the stainless gleamed.

As it turned out, we were looking a little too good. Unbeknownst to us, there was a gentleman having a late lunch at the Lighthouse restaurant, with his broker. He’d flown in from Alaska looking for a boat, and hadn’t found one. Until he saw Predator.

The broker met us on the dock.

Well, you know how it is, you never say no to a question like that. If you’re happy with your boat at the time, you just jack the price up. Everything’s got a price, right?

“Yeah, sure.” I said, and I named an exorbitant price. Twice what I’d paid for the boat just a year earlier.

“Mind if I show my client?” he asked.

A half hour later I was standing scratching my head, wondering what had taken place. I had sold my boat. It was Sunday, and we would haul for survey on Monday. If all went well, I would have a week to vacate.

Uh. What happened? I was happy. For the first time in untold years I had a boat with no projects.

But maybe a boat that was a little faster? How about one that would sail into the wind at 27°? That would be nice. Maybe something a little newer? More fiberglass and less teak to varnish. That’d be good. Right?

Two weeks later I was moving onto a brand new 42 foot performance cruiser. It had less than an “hour’s worth” of teak, could be single handed by any dolt, even me! Below decks it was pristine and simple. Kewl! I named her Assailant, and took off on our maiden voyage.

It wasn’t three months later I was shopping for another Taiwan Turkey. Sure Assailant was fast. Yeah, she was easy to handle. There was almost no maintenance, and she almost maintained herself. The perfect boat, right?

No way, dude! She had about as much personality and character as a Tupperware container. It wasn’t until late one night, I was in my dinghy after an evening doing 12 ounce curls at the Harbor Lounge. I was looking for my boat and I realized, I didn’t recognize it. My boat looked just like everyone else’s! Waugh!

As most folks know, I did find a project. The Lost Soul. My friends thought I’d slipped a gear or two. To sell a new, “perfect” boat, and buy one that is closer to sinking than not. It was just crazy. But the first moment I walked onto her teak decks, complete with missing caulking and bent stanchions, I was home.

And then I realized the truth of the situation. There is no perfect boat. There is just the boat that’s right for you. How do you know it? What do you look for? Well, as soon as you step aboard it feels like home. Logic doesn’t enter into it, though logical we all strive to be when looking.

As illogical as it all sounds, part of the joy I get from cruising includes those days when I stand, screaming “I hate boats!”

So the next time you see a neighbor, shirt all greasy, blood dripping from a wounded paw that got hooked on an old cotter key (yeah, it happens to us all), pity him not. Know that, in reality, this is the fun part.

Remember this. The more hard fought the battle, the more heartfelt the victory. You gotta slay a dragon or two to kiss the princess.