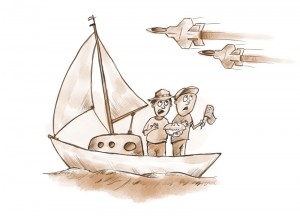 Just got back from a trip to the Bahamas. Crewed, bringing back a 38′ Morgan cutter from Great Harbour Cay to Ft Pierce. Her name is Dreamer, a fine vessel. There is a saying amongst sailors that, “The adventure doesn’t start until something goes wrong.” We lost steering on the trip, in the dark, in three-to four-foot seas. Could not go straight. Could only steer in circles to starboard of various radii. Cables going to quadrant on rudder post worked loose and port cable came off quadrant and jammed. Was able to find and repair the problem by hanging upside down in the bilge, which was kinda like standing on your head in the seat of a runaway roller coaster while trying to adjust the brakes.

Then there was the issue of the big bunch of grapes that I had just eaten, which were just fine when I was right side up, but did not like the upside down circle turning while bouncing up and down at all. But that’s another story that doesn’t need telling.

Another interesting thing happened on the trip, under the category of “big brother is watching.” We came within a mile of a cruise ship at night that was lit up like a used car lot at Christmas time. Somewhere in the midst of all those lights there was supposed to be one red and or one green running light(s). These running lights are there so other boats can determine course direction so as to avoid a collision. Those liners and freighters move a mile in three minutes, so a misunderstanding can be quickly catastrophic, in particular to the smaller vessel. To put things in perspective, the cruise ship could have accommodated our boat in their swimming pool, like a rubber duck in a bath tub. I personally counted several red and green lights, real or imagined. So I grabbed the binoculars my kids bought me for a retirement present. Holy s___. That just makes the situation seven times scarier, so I put the binoculars away.

Even with a visual and a blip on the radar screen, it takes a little while to determine what evasive action you should take. We were doing six knots, looking at her side, and she seemed to be stopped, but how can that be, she should be doing at least 20. Was it an “optometric illusion?” Our skipper, on watch, had changed course a couple times but still wasn’t sure of our situation, so called me up on deck to help determine what action we should take; a standard thing to do.

Now the interesting part. We always monitor channel nine on the marine radio. I heard the US Coast Guard in Miami talking to the cruise ship.
“US Coast Guard to Sovereign of the Seas, over.”
“Sovereign of the Seas, go ahead.”
“Have you contacted that vessel behind you?”
“No, over.”
“What kind of vessel is it, over?”
“Sail, over.”
At this point I made the suggestion that we contact the US Coast Guard and put them at ease, because obviously they were monitoring the situation all the way from Miami and had seen us make several turns in immediate proximity to a liner. Our skipper said no, for some reason like, we haven’t been contacted and should leave well enough alone. I evidently had an entirely different picture in my head than our skipper did.

Mine went something like this: A bored 25-year old Coasty at 2:00 am with the might of the entire US military, and in particular the Strategic Air Command, at his fingertips, thinks, worst case scenario, a cruise ship may be being approached by terrorists or pirates. He’s thinking yeah, maybe, but not on my shift. I see him tapping his finger nervously on his desk next to a very large, very red button. I picture that the other end of the wires connected to that button are connected directly to two US Air Force fighter pilots in a ready room, looking out the window at two F22A Raptors and possibly musing, “nice night for a flight, wish we had a mission.” They have trained for this kind of thing for years and are itching to “get er done.” I’m thinking if he pushes that button it’s going to shock and then immediately piss off two guys that I, for one, don’t want to even mildly aggravate.

Of course, there is the old saying, “They would have to catch us first.” Once we quit zigzagging we could do six knots in a straight line. The Raptors, on the other hand, do about 600 knots and have a distinct advantage here. Perhaps we could out-maneuver them. But I am told just two of these planes can take out a country the size of Iran without even having to refuel.

So, I try again. “Perhaps it wouldn’t hurt to just let the CG know that were on the home team, maybe mention mom’s apple pie, hum a few bars of our national anthem, name some NFL linebackers and hope to hell we don’t make a mistake and name some tennis or backgammon players.” That worked. “Okay, okay, give me the mike. USCG, USCG, this is the sailing vessel Dreamer out of Grand Harbour Cay en route to Ft. Pierce, FL, in proximity of Sovereign of the Seas, over.” After just a few minutes of grilling, the CG knew more about us than my doctor did after my last physical, including the glove thing and all.

I am sure I sensed a tone of disappointment in the young Coasty’s voice as the desk tapping stopped, and what could have been a really cool computer game for him eroded into another cup of coffee and a “hold” on the Raptors.