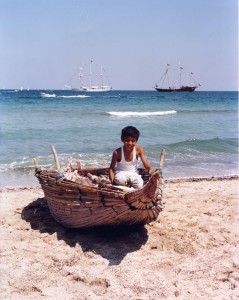 Coaching on the water for many years has given many opportunities to try out different kinds of boats. Two craft I’ve tried to describe here are perhaps some of the most different I have been involved with:

A ‘Shasha’ (reed boat) was built whilst I was the sailing coach in Oman. An old fisherman (one of the very few who knew how!) was asked to build one for the Navy in Oman. He came into one of my sailing centres, and completed the craft in a day (apparently though it took him a couple of days to gather the right reeds). And explained that modern synthetic rope made it much easier to tie the boat up!!

Craft like these have been used for at least a millennium. Whilst I was away racing in the Dubai-Muscat race, three serving RNO sailors took this tiny boat right down the coast. Leaving from their naval base at Wudam to Muscat only using sail and oar. Their voyage of 60 miles took them three days in intense heat using the afternoon sea breeze. I felt this was a much more spectacular achievement than our two and half days racing (360 mile) light wind offshore race.

The old Omani who built this iconic craft explained that these boats had to go ashore after a day’s fishing, to dry out. Thus they could only be used for one season. After that the reeds became saturated 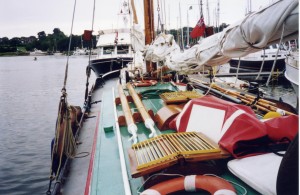 and didn’t dry out…

Dutch sailing barges are perhaps one of the most sophisticated working boats ever conceived. I was asked to take the owner of a 57ft Dutch sailing barge out to make sail. I’d just finished five days teaching a family on a 26ft bilge keeled Westerly Centaur. This would be a rather different…

Built as a pleasure barge Rann had owned her for quite a number of years. Living aboard on the Hamble but he’d never hoisted his sails. His plan was for me to come along and have Keith Beken come out to take some photos in the Solent. After meeting Rann, his wife and teenage son on the Hamble. It still wasn’t clear why he needed me! He seemed to understand his boat very well. Then it became obvious that he was worried about using the lee boards and didn’t want to break one off! I’d been involved racing on some of the Thames Barge matches when I was a boy using leeboards; but that was a heck of a long time ago!

Her gaff rig didn’t faze us at all. She had a very short curved gaff typical of all these Dutch barges. Each leeboard weighted about three-quarters of a ton. They were made short work of by having beautiful little winches to run them up and down.

Motoring out of Southampton Water we hoisted the main, jib and staysail in a light SW’ly breeze. Then started playing around using the leeboards. She could be easily handled by a couple of experienced 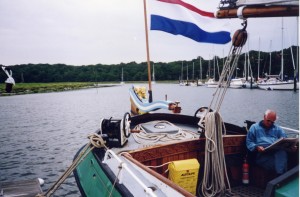 hands. But it was useful that there were four of us whilst we were learning her quirks. She sailed majestically and tacked slowly enough too easily to raise the windward board and lower the leeward even for our green crew!

After meeting the photographer off Cowes and sailing her about for him. We decided to go up the Beaulieu River. The shallow almost drying entrance on a falling tide didn’t worry us because of her lack of draught. She would float in very thin water, drawing less than a metre with her boards up! And we managed to go all the way up to the marina at Bucklers Hard.

We had a couple more fun days sailing her down to Lymington. Then took her back to the Hamble with a bit more wind. She was remarkably dry in the short Solent chop and very spacious below. I left thinking she was an extremely comfortable and a wonderful vessel to live onboard.