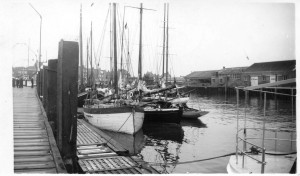 My father’s first boat after the war, a converted Lowestoft fishing smack had a real fire (bogey stove) and an Asbestos covered chimney. The second one was fitted with beautiful Brass Gas lamps complete with mantles. Nowadays it’s almost impossible to imagine a yacht with Asbestos in it or gas piped through the boat.

Who can ever forget both the sticky texture and fishy smell of proper old oilskins? Or the mixed fragrance of a wooden boat’s bilges back in the 50’s and 60’s; a combined mixture of paraffin, petrol and possibly something else slightly less savoury. Having to fight the twists in natural fibre ropes or stiff flogging canvas. Odd tricks like knowing how to stream the log, having to take the navigation lights down below to light them (they still blew out!) and work up a position using D R. All these strange skills and many others are still etched into the minds of many sailors of my generation.

Were we lucky to go sailing back then; and learn them? Are all these different bits of old seamanship totally useless nowadays…yes probably and maybe no! Perhaps we can revert back to some of these earlier skills when things go wrong. If we can still remember! 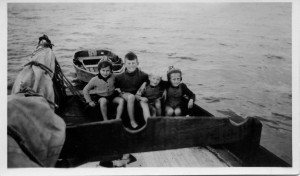 Its good things have changed; yachting is safer and much easier. Modern items of equipment have had a huge impact. It’s still a debatable issue though; that too much dependence on them might be at the expense of good seamanship.

When I started sailing with my parents. Most of the equipment we take for granted now GPS/Plotters, VHF’s, Radar, echo sounders, wind speed and direction instruments weren’t available. Folks managed with the basic equipment that had been around for hundreds of year’s rope fenders, brass compasses, lead lines, trailing logs etc. combined with careful seamanship.

Indeed sometimes I wonder when alongside other yachts these days. How many modern yachtsmen don’t bother to carry such basics such as; a lead line, manual Fog Horn, even a hand bearing compass and certainly not a sail repair kit. And can they moor alongside a tidal harbour wall for the night safely with their lovely plastic boat? Or navigate if they have a complete electrical failure on their boat. No doubt some would reply ‘that’s easy; I only go into marinas and we carry a spare handheld GPS with plenty of spare batteries’.

Sixty years ago when cruising we used a lead line for the depth. Clever markings meant you could feel what you’d measured even in the dark! 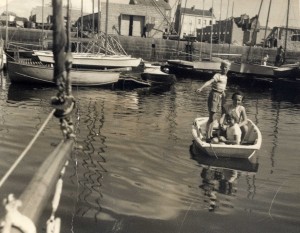 ‘Swinging the lead’ (as we know from that colloquial expression!) isn’t difficult. As long as the boat wasn’t moving too fast! The line just needed to be chucked forward as far as possible. Swinging it back and forward as practice; paid off!  You needed a few coils of rope well laid out in the other hand. Then it would go out smoothly. Good timing was necessary so that the weight had reached the bottom, by the time it reached you. The line going slack told whether you’d been lucky! Then you pulled it all up. Yelling out what you felt you’d measured! Sounding much over five fathoms (10 metres!) on a small craft was quite difficult! Anyone can do it; it’s not rocket science.

Before our industrial revolution coated the Continental Shelf black around the UK. A professional sailing master or local fisherman would be able to tell where they were just from what they pulled up on the bottom from the tallow on the lead. It’s easy think that these guys didn’t know what they were doing. They did all trade was done under sail. 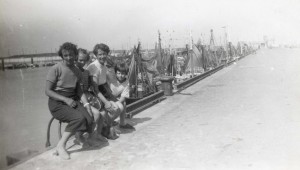 My father and his friend George Farmer both bought the early rotating neon Seafarer sounders shortly after they became available in the 60’s. Watching them switching the sounder on and dipping in the loose transducer cable. Then tuning the instrument and noting the depth. But still using the lead line to check the depth; must be one of my sister and my most abiding memories.

They both quickly realised reading an echo sounder was quicker and more accurate; especially if you’re shorthanded. I’m certain they would embrace all the new technology but still use old basics, too! Particularly remembering how useful a lead line is for sounding round the boat when you run aground; to find out where the deep water lies.

The major joy of cruising back then was the lack of other yachts and you learnt to be totally self-sufficient.

Pics That Will Keep You Sailing (31 Pictures)

To Deploy or not to Deploy Anchor Buoys…