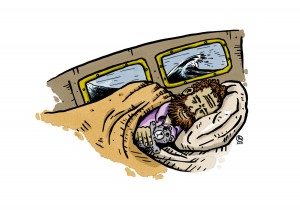 I was dreaming I was anchored in Suverov Island in the Northern Cook’s.  It’s my favorite dream.  A crystal clear lagoon, the sun is shinning, and the brilliant white sand of the Motu is just a few hundred feet away.  Just as I was about to dive in for a swim I heard Jody calling from a distance.

On?  On what?  Then, slowly, the dream started to fade, and the reality of a gale blowing us from the Azores to Gibraltar started to return to my head.

Reality!  What a concept!

It was four in the morning.  Time for my watch.  We’d been fighting cold and bad weather since leaving the islands, almost three days hence.  When I was last on watch, the winds were blowing over 40 knots.

I pushed myself away from the bulkhead I was jammed against, and managed to pull on my sweats.  The boat was heeled well to starboard, and just standing was an ordeal.  I didn’t want to get up.  I wanted this all to go away, like a bad dream or something.

I made my way out of the aft cabin and into the main salon. Two new bruises were added to my body as I made my way through the dark interior of the Lost Soul.

In the galley the flame was on under the coffee pot.  It was just like Jody to think of having the coffee ready for me.  Wedging my overly large butt against a bulkhead, I grabbed my favorite cup (I found it in a small shop in Tonga years earlier) and filled it with the rich, dark brew.

It took a bit of juggling to get the full cup up the companionway steps, but I managed to do it.  As I emerged from the cabin I saw Jody strapped in behind the wheel.  She was wearing her foulies and was jammed between the mast and the wheel, with her feet on the wheel to steady herself.

Here we were, on the third day of a storm in the North Atlantic.  It was two in the morning, and cold & wet, and she was smiling.

“What a great night!” she exclaimed.  “Look, Orion is so clear you can even see the smaller stars!”

I sipped my coffee and looked around.  Stars?  Who wants to look at stars?  We’re hundreds of miles from land and it’s blowing stink.  The seas are knocking us around like we were Mike Tyson’s date, and the decks are slimy with cold saltwater.

I looked over at Jody and she had this big grin on her face.

“The wheels all yours” she said, as she stood and unhooked her tether, “The winds have been abating a little, they are down to 30 knots and coming around.  I let the sails out a little bit.”

And with that she headed down below.

I put on my harness and hooked my tether to the base of the mast.

As I wedged myself in I looked out to sea.  It was beautiful.  The moon was glinting off the water, and the seas were actually starting to calm a little.  I looked at the sails, and they were still reefed, but now they were on the first reef point, instead of the second, as I’d left it hours ago.

In the next hour the winds dropped from 30 knots to around 20.  Instead of blowing tight out of 40 degrees, now they were almost 90 degrees.  I let out the final reef, and fully unfurled the headsail.  Life was good!.

For the next hour I was probably one of the happiest people on earth. The winds moved around to come from behind us, and were blowing steady at 18 knots.  After days of beating into a blustery cold storm, all of a sudden we were on a down-wind run.

The sunrise watch has always been my favorite, but this particular morning it was particularly spectacular.  I went below and started the coffee and woke Jody.  A few minutes later she emerged from below with a hot cup in her hand.

Neither of us said anything.  We just sat there, watching nature do things that only she can do.  The brilliant sky reflected off the water, and the Lost Soul was cutting through it like a thoroughbred racer.

This was our reality.  It was our life, and our dream.  How many times can a person live a perfect moment?  Existing in a moment when all things come together to make the feel, sight, smell and taste of life so real?

Fight a storm, sail an ocean, live through adversity, and feel the overwhelming relief when the battle is over.  Then enjoy the fruits of your labors.  Where else in life can you accomplish these feats?

For the next hour Jody and I sat in silence as we lived one perfect moment after another.  End to end, over and over.  No words.  Just perfection.  Nothing could improve it.

Then the bilge alarm went off.  We were back into reality.  I went and unstuck the bilge switch, Jody took the wheel, and we waited for the next “perfect moment.”

Under The Sea With Hannah Mermaid (27 Pictures)