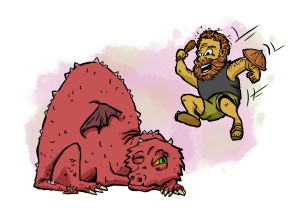 We were about 50 miles out of Palmyra Island, on the 900+ mile voyage to Hawaii.  There was Jody & I, and two young crew members we’d had with us since Papeete, almost three months, Luke & Joel.

All of a sudden the boat started to swerve off course.

I figured it was the fifteen year old auto-pilot acting up, so I turned it off and grabbed the wheel, giving it a turn.  It turned to full lock and nothing happened.  We were going in circles.

So here we were, 850 miles from civilization, and 50 miles from a semi-deserted island.  I went below and lifted the aft bunk.  There was the problem.  Our steering gudgeon had broken in half.  Without it, we couldn’t steer the boat.

There was no panic.  No running around wringing our hands with worry.  Just a couple minutes trying to remember where we put the emergency tiller three years earlier, when we left our home port.

Remembering where it was, we dug it out from under a bunch of stores and spares.  It was an eight foot stainless Thigamabob that looked like a thalidomide socket extension, with a swiveling bar on the top.  We unscrewed the emergency tiller access plate and stuck the thing down into the black hole, wiggling it until it dropped onto the top of the rudder post.  Kewl.  It fit.

I dropped the tiller bar into place, checked the bolt to make sure it was tight and secure, and gave it a tender push to test the rudder.

It snapped off in my hand.

The fifteen years it had sat unused had weakened the weld, and all it took was a little pressure to snap it off.  Now what?

After a couple minutes of thought, I sent Luke down to the tool bin and had him bring up two of the large pipe wrenches that we keep on board to tighten the packing gland.  We placed them facing each other on the emergency rudder pole, and wrapped ‘em with a small piece of line.  When finished we had a small tiller post.

Now here we were, in the middle of nowhere, with a broken rudder, and just a twelve to fifteen inch tiller handle to steer a 42 ton ship.  If I were reading this I would be really worried.  Thinking about it, it seems like we would have been in a real fix, but I can recall with crystal clarity how I felt…Excited!

Really!  This was what world cruising is all about.  Getting into situations that allow you to use your God-given sense to overcome adversity, and feel the surge of adrenaline when you first know you have done it.

For the next ten hours we motored back towards Palmyra.  We had to steer by bracing our backs against the rail and pushing with all our might with our legs.  It took two people on the rudder at all times.  I was very thankful to have Luke and Joel with us.  Their Nineteen year old legs worked better (and longer) than my fifty year old variety.

As Palmyra came into view the next morning, the people on the two boats inside came out to help us through the pass, along with Roger, the island caretaker.

We had made it.  We’d slayed the dragon, and we were about to kiss the princess.

There is no way on earth for a person to feel the exhilaration of conquest without first having to overcome adversity.  The harder fought the battle, the more heartfelt the victory.

And that is why we go to sea.  No one wants anything to go wrong.  We don’t plan on having things break, or storms hit us; but we know, sometimes between when we leave our home port, and when we return, something will happen that we will remember for the rest of our lives.  A moment in time when you will have the same feeling David had when Goliath hit the dirt.  The same feeling Columbus felt when he sighted San Salvador.

And the same feeling I had when we sighted Palmyra Island, that beautiful day in 1993.

If the rudder had not broken, and the voyage from South to North Pacific had been idyllic, we would have enjoyed the sail, for sure.  But since we did have a dragon to slay, adversity to overcome, we will have a moment that will last four people the rest of their lives.

Whenever I think about Luke or Joel, who have gone on to college, and to their lives, I think back on that night, laughing through the pain of overworked and cramping legs.  Taking turns at doing the impossible, and feeling the release as our goal came into view.

There is an old saying that salt water cures all ills; either sweat, tears or the sea.  When all three combine, when the ills become an ordeal, and are overcome, that’s an adventure!

Podcast: What Does A Sailor Do Without A Boat?