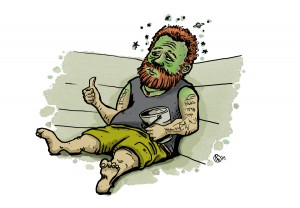 Once again it is time to take on the “authorities” that are out there spouting rhetoric which has about as much basis in truth as the IRS man standing there saying “I’m here to help you.”

What I am referring to is the old saying, “The two happiest days in a sailor’s life are the day he buys his boat, and the day he sells it.”  This is usually accompanied by a knowing wink, and told to a man who has just bought his dream boat, only to find out that the portholes were an extra added cost option.

To accomplish one’s dream has to be a pretty intense rush.  Accompany that with the stomach-churning adrenaline rush of actually waving to those on shore, and departing on a journey that you know will test your very being, adds a little cream to the filling.  Then add the knowledge that, before you return to that dock, you will live adventures that others only dream about.

I don’t think I will ever forget the feeling, that very first morning, as we hoisted the hook (by hand, there was no windlass, or engine for that matter!).  I looked back at the marina I had lived in for the past couple years, and I think I actually felt my heart swell with pride.  I had done it.  Set off on and adventure that I knew would change my life.

Two hours latter I was puking over the side, sea-sick as any landlubber, as we were becalmed less than two miles off the harbor entrance.

Believe it or not, I look back on that day as one of the best days of my life.  It took a couple days for my system to “adjust” to being at sea full time.  Until then I had only day sailed for a few hours at a time.  But it passed.  The sickness.  Not the feeling.

But that was not the very best day I have ever had.  Close, but still it stands as number two.

No, number one was reserved for the first time I actually captained my first voyage across a major ocean, and made landfall.  Back then we didn’t have GPS, and Sat-Nav was way to expensive.  I used a sextant.  Roller furling was pretty new, and not many cruisers were using it yet, so we used our hands to haul and hank-on sails.  Weather Fax?  A dream for most cruisers.

That was part of the beauty of the day.  We had fought bad weather, used our hands and muscle, our basic intelligence, and a little old fashioned adventuring spirit, and landed in Hawaii just as Captain Cook had done a few hundred years before us.  What a feeling!  How can you ever have the gut-churning feeling of having slayed a dragon, if you have never stood before one breathing burning fire down on you?  You have to fight the battle to reap the rewards, and the rewards of making landfall after storm and hardship is unbeatable.

Over the past years I have bought and sold a number of boats.  Okay, I have to admit, the feeling of unloading a cash-hole and standing there with a wad of green can make you smile, but it is always accompanied by the feeling that you have just let go of a friend.  It’s bitter-sweet at best.

And the day you buy a boat?  Let me ask you this, as most of you are boat owners…can you recall how you felt the day you bought your boat?  Let’s see…a whole bunch of anxiety, like “Was this the best boat for me,” or, “Could I have gotten a better deal?” or better yet, “Maybe I should have gotten a bigger/smaller (make your own selection) boat!”

No, I think I am gonna have to drop that old wive’s tale from my repertory.  I know for a fact that the best two days of a man’s life are not the days that he buys and/or sells a boat, unless, of course, you happen to be a yacht broker….then it could be true I guess.

But if there is one truth about happiness you can glean from all this excess verbiage, it is the fact that the best two days of one’s life can indubitably be found somewhere in between the day you buy a boat, and the day you sell it.

Okay..now let’s get out there and see if we can’t find those days!