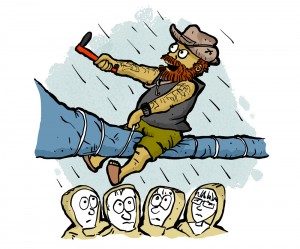 Did ya ever notice how, the closer to taking off on a voyage you get, the more you start worrying about things that you know you can’t do anything about?  I am specifically thinking back on my departure early last year on a little 2,700 mile voyage across the Pacific.  Joining Jody & I on this trek were three people I had not sailed with before, and an old friend who had sailed with us in the past.

Now I have always had a kind of rule I try to go by.  If you are going on a voyage, the hardest thing to do is to set the departure date, so just set the damn thing and then make everything happen according to that schedule.  In the last (this number has been deleted to retain my youthful image!) years, I have always tried to stick to this rule.

So, the date was fast approaching for our departure.  Our inexperienced but enthusiastic crew arrived the day before “D” Day, just in time for our “going away” party.  After all, how can you miss me if I don’t go away?

So, the night of our party the heavens opened up, and we had biblical amounts of cold and wet stuff falling on our heads.  The winds were blowing harder than a politician on election night.  It was not a pretty sight, and the weatherguys were saying it would get worse before it got any better, and that would be days later.  Pretty much, this was the biggest storm we’d seen in over a year.

Did I care?  Not in the least!  As a matter of fact, I was kinda looking forward to leaving in a storm.  What a great feeling; to set sail with a double reef, heading out the harbor entrance, leaving mouths agape!  How kewl!

But I gotta tell ya, my erstwhile crew were not quite of the same mind set.  Actually, they thought I’d lost mine.  My mind, that is.

Having made numerous departures in the past, I knew that what we were experiencing sitting here in the harbor was in no way as bad as what we were likely to encounter “out there.”  Of course, I had the good sense not to tell them that.  I’d have to face down a mutiny if I’d told ‘em my reasons.

But, believe it or not, I did have an alternative purpose to taking off that next morning, in a full gale.  As a matter of fact, after I wrote the story of that voyage, I received a number of nasty letters telling me I was remiss in my duties as a magazine person to set such dangerous precedents; to put my crew in harm’s way instead of sitting safe in the harbor until the storm blew by, and then taking off in good weather.

Hogwash and bullpuckie!  That’s pretty much my reply to that.  You see, in the next three days my stalwart crew sailed through gale winds and 16-20 foot seas as we fought our way out of the harbor and down to Long Beach for fuel, and then 300 miles south, blown almost 20° off our preferred course.  As we sailed, they learned that the boat could handle it, and to their surprise, so could they.  They actually started to enjoy the adventure.

And then one morning the winds started to subside.  As that day progressed, the seas started to slacken, and by mid-day of the fourth day at sea, the sun came out to warm us, and to dry our saturated vessel.

We, as a crew, had braved the worst that the seas could throw at us (or so it seemed!) and came through none the worse for wear.  We had conquered the sea gods and could see things starting to improve and keep improving until, at last, we were sailing in what most people hope to find, perfect weather and a downwind sail.

Now let me ask you, if we had sat until the weather had cleared, and left in “good” weather, what would we have had to look forward to?  Nothing but deteriorating weather and conditions ahead of us.  As it was, we had conquered the bad stuff, knew we could handle it as a crew, and knew, without any doubt, it would get better…

Ponder this: is it better to be in good weather, looking ahead to darkening skies, and worry about what is to come; or to sit under that dark cloud, looking forward to the brightening sky and know you have seen the bad, and know you are about to enter Nirvana?

…and perhaps we should add a tag line to that verse;

…and the option to choose the order in which I face these things!