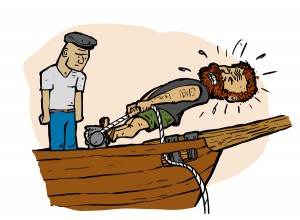 I can vividly recall almost 30 years ago, the feeling I had the first time I was on a sailboat and felt the mainsail set and fill with wind.  I was about 28 years old (yeah, I am that old!), and I remember how I grabbed onto the shiny chrome thing next to me (that’d be a cleat), and felt my knuckles go white as the boat started to flip over, or at least that’s what I thought it was doing.

I had just made an offer on this Cal 28 named Rogue.  The only reason I was buying it was; (A.) I had just made some money and it was burning a hole in my pocket; (B.) My business partner called that morning from Tahiti saying he’d just met some guys and they asked him to join them on a sail from Moorea to Hawaii, and; (C.) I’d made the mistake of going to Capt. Ahab’s Coffee Shop at the marina for lunch, and saw the guy sticking a for sale sign on the boat.

So anyway, here I am hanging onto a protruding piece of chromed bronze as I was about to end my life on my very first sail.  Of this I was sure.  Then the seller screamed at me from the wheel, “Hey, grab the sheet and ease her a little.”

I was trying to figure out why in the world he’d want to be messing with sheets, when he let go of the wheel and somehow actually managed to walk across the vertical (or it seemed to me) cockpit to a rope hanging from a thingamabob that held it clamped firmly in place.  He miraculously let out some rope, and the boat returned to an almost livable angle of tilt.

I watched in total awe as this otherwise normal looking person turned the boat around by doing a bunch of magical stuff with ropes and a stick he kept pushing back and forth (that’d be the tiller).  Soon, I started to release the death-grip I had on the doodad.

We sailed for about an hour, and when it was time to turn the boat back to the harbor I actually was able to help.  Well, okay, so I was actually able to get out of the way.  But that was a start.

I made a deal with the guy to teach me to sail if I bought the boat.  He was leaving for Hawaii in five days on a 50’ steel ketch, so I talked him into three lessons.

Hell, anyone can learn to sail in three lessons, right?

By the end of day three I was actually able to back the boat out of the slip, get it out of the channel without hitting more than one or two protruding objects, and pull the rope that made the mainsail go up.

In his defense, he did try to teach me the names of some of the ropes, but I thought that was all kinda silly.  A rope is a rope.  Halyard, sheet, topping lift, who really uses words like that anyway?  A rope is a rope.

I must digress here for a moment.  You see, at this time in my life I was publisher of a motorcycle magazine.  My life consisted of riding around the country on a bike and getting stories.  Sailing seemed like a whole other world to me.  On a bike, a wheel is a wheel, and a bolt is a bolt.  Rope should be rope.

For the next three months, every afternoon about 2 pm I would grab my editor who went by the unlikely name of Degenerate Jim, and head to the harbor.  We would park our bikes in the lot, walk down the docks in our boots and Levis, untie the dock lines and head out of the harbor. By the end of month three I had reached the most dangerous time of being a sailor – when you think you know everything.

By now, my partner had returned from sailing the Pacific and told me he’d met a guy with a big topsail schooner who wanted to sail to Central America.  Was I interested in going?  It took about five seconds to figure out how to arrange it, and I was signed on.

It took about a month for the Stone Witch to provision and sail south from San Francisco to Redondo Beach.  In that time, I sailed every day.  A week before the Stone Witch came in, I sold Rogue to a friend of mine and was ready.

After a farewell party that won’t soon be forgotten in our harbor, we departed. As we cleared the harbor Captain Olsen screamed to hoist the rode.  I stared at him blankly.  What’s a rode?

He then started speaking in tongues or something.  Hoist the halyard, tighten the sheet, set the stays’l halyard, ease the topping lift.

I gotta tell ya, all of a sudden it started to sink into my alleged mind. Yes, there really is a reason for all of the nomenclature of a boat, and there is a history behind every name.