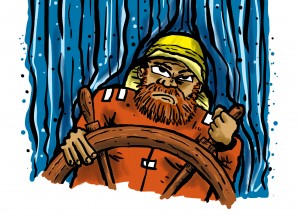 We were smacking into a 30 knot headwind, with seas that were said to be 13 feet, but felt more like 30.  We were about as tight on the wind as we could get.  When the autopilot would swing us closer to 30 degrees than 40, we would slam into an oncoming wave and come to a complete stop.  To add to our plight, there was a 2 knot current, against us.

I knew before we left that we’d e heading into it, and we had over 90 miles to go to get to the lee of the next island.  I figured it would be a hard beat, so we left early.  Did I say early?  Four thirty in the morning is more than early… it’s indecent, but we did it.

I was, uh, let’s say, “In less than a good mood.”  Each time the boat slammed into a wave and stopped, I could hear a growl grow in my throat. Lurking in my alleged mind was the thought that I really hated this.

As the day wore on, and I saw that we would definitely not make it into our anchorage by dark,, I really started to stew.  I hate coming in after dark.  I hate beating into it.  I hate having waves slap over the boat, getting everything wet and salt covered.  I hated sailing!

And then it hit me.  Hate is not bad.  Indifference is bad.  The opposite of love is not hate, it’s indifference.  One thing for sure, I was not indifferent to this crossing, I hated it!

Soon it sunk into my feeble head that, no matter what I did, we would not be in before dark.  So what?  It’s not like we were heading into a rock-strewn uncharted anchorage.  We would be coming into a well marked marina on the Island of Oahu.

I was prepared.  I had a great radar, an excellent GPS, and even a computer running The Cap’n, showing me exactly where I am at all times.  No problem.

Then I noticed a change in my attitude about beating into it.  I noticed the way the bow was plowing into the waves was actually pretty kewl!  Each time we’d get up to four or five knots, we’d come flying off a wave, and slam into the next, throwing hundreds of gallons of water into the air.  It was so captivating I made my way out onto the bowsprit.  Each time the boat would get thrown into the air, I had to hold on to keep from being thrown off.  Then the bow would fall, what seemed like an eternity, until it would dive into the next wave.  I felt like a kid on an amusement park ride.  Then I realized the change in attitude.

Yeah, I know we have used the adage “Attitude is the difference between an ordeal and an adventure,” but all of a sudden it really started to hit home.  When I got back to the cockpit I started looking at the faces around me.  Jody was grinning like a Cheshire cat and loving the adventure. Tom & Lynn, our friends from back home that had joined us for this leg, were both tucked into beanbag chairs and loving life.  Zac, our crewman, was sound asleep on the aft deck box, oblivious to all around him.  John, who’d flown in from Las Vegas, was kicked back, earphones in place, listening to his mini-discs and enjoying the ride.

As the day passed, and the wind kept blowing and the seas kept growing, I tried to analyze just what it is we get out of this sailing thing.  What is it that makes it such a passion?

At about two thirty in the morning we were a mile off the light that marked the entrance to Ko’Olina Marina.  Everyone on board was awake and alert, trying to pick the 2.5 second light out of the myriad of lights on the island.  No one was feeling indifferent.  Everyone had the same feeling of wanting to shout “Hey, we did it!  We just crossed the Kaiwi Channel!”

That feeling, that sense that you have overcome something that a lesser person would not even attempt, that is what makes you love the sailing life.

Yeah, a good crossing, wind at your back, calm seas, warm sunny days; those are the days you hope for. But it is the days you have really planned for, the days with high winds, slamming seas and currents that you have to beat;. That, my friends, is what brings out the passion!

Vintage Attitude – A Rose Is A Rose, And A Halyard Is What?