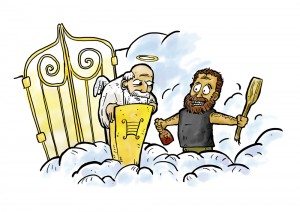 Can you imagine if everyone’s life was judged on where or how it ends?  You know what I mean.  If everything a person has done in his or her lifetime meant nothing more than where it lead to when the time has run out, it would all be kinda silly, wouldn’t it?

Well, a voyage is pretty much like life itself.  It’s not where the voyage is heading that is important.  No, rather, it is what happens along the way; during that lifetime, during that voyage.  You know, there are people out there who are in a hurry for it to be over.  They are in a hurry to “reach their destination.”  Pretty sad, isn’t it?

Unfortunately, every voyage does end.  If there is a sad part to cruising, that would be it.  Every voyage, like every life, will come to an end.  And at the end of the voyage, there is always a touch of sadness.  It has passed.  The adventure that you dreamed and created is behind you, never to be re-lived.

Oh, you can retrace your steps.  You can even plan the same stops, the same time of departure, and even the same crew, but it will never be the same.  You have been there, done that.  Each time you depart, you will find new adventure.

In the past 30 years, I have sailed to Catalina Island literally hundreds of times.  Yet, I can’t think of any two trips that were the same.  Oh, I’ve had the same weather.  I’ve done it over the same number of days, even on the same dates (different years, of course), but each trip, each voyage brought its own adventure.  I still get the same feeling of excitement as I pull out of the slip that I felt the first time I went over, so many years ago.  I still feel the same small thrill when I see that my anchorage is empty and waiting for me.  In the wintertime, when we are the only boat in an anchorage that holds 400 boats in the summer, I love to just sit on the deck, looking out at the beauty, and watch the seagulls vie for a closer perch to my boat, in case we might “drop” something overboard.

I think that’s the beauty of the cruising lifestyle; that certain knowledge that you will experience a new life’s adventure every time you leave port, and if you don’t, you know you’ll find tranquility in its stead.

After all these years, and after all the tens of thousands of miles I have been able to cruise, each time I untie the docklines I still get that same feeling of excitement, that same glow inside that let’s me know that I am alive and about to embark on another adventure.

Oh, it may just be a four-hour sail to Catalina, or a two-week crossing to Hawaii, or a voyage down the coast and through the Panama Canal, or around the world.  It doesn’t matter.  The voyage is the thing.  The knowledge deep inside that, in the time between untying the docklines and resecuring the boat back in her slip, there will be an adventure.

Recently, this has been brought into focus by two sailors who lived through some true ordeals, after leaving for “a three hour sail.”  Unlike Gilligan, these men both underwent life-changing times aboard their boat.  One Vietnamese man set sail for Catalina from Long Beach, California.  Literally, a four hour sail.  Three months later he was “rescued” off the coast of Costa Rica.  When the Navy took him off the boat, he had enough food aboard to live comfortably.  He was dismasted and had drifted south for all that time, and he was quite healthy and happy living off the sea.  He captured sea birds by baiting them with pieces of the fish he’d catch.  He cooked using wood he tore from the interior of his vessel.  All he wanted when they picked him up was some help fixing his mast, so he could go on.  He was still enjoying the voyage!

Another gentleman sailed his 22- foot sailboat out of Key West and was also dismasted.  He got caught in the Gulf Current and was found, half dead, four months later off of South Carolina.  He had not fared quite as well as the other man.

The point?  Simple.  No matter how small a voyage you are contemplating, it could turn into an epic, life-altering adventure.

The better prepared you are for these adventures, the better you will fair.  Had these men had the basic tools of seamanship, like a radio, or flares, or an E.P.I.R.B, what happened would never have transpired.  But no matter how you look at it, they did have a true life-altering adventure.

So the next time you are going out for a little daysail, don’t be in a hurry to get to the end.  The voyage is like life itself.  It’s not what you find at the end, it’s the voyage.  Enjoy the ride!

Vintage Attitude – A Rose Is A Rose, And A Halyard Is What?

Vintage Attitude – There You Are