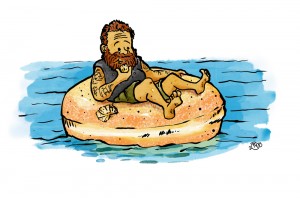 Jody and I decided to anchor in a very small and tucked away bay on the Island of Tahaa in the Society Islands of French Polynesia.  For the previous couple months we’d had visitors who’d flown in to sail with us, and all of a sudden we found ourselves, just the two of us, with nothing to do in paradise.

In the morning we took the dinghy ashore, tying up to a small wooden pier on the shore.  We wandered about a quarter mile up the gravel road to where we found a small store.  They didn’t speak English, and we didn’t speak French, but there was no communication problem.  They smiled, we smiled, and we walked through their small store.  They didn’t have much to offer.  Just some basics.  However, on the counter there was a plate filled with fresh homemade sugar donuts.

We grabbed a couple and wandered leisurly back to the Lost Soul.  I remember kicking back there on the foredeck of the boat.  The sun was just starting to get warm and we were surrounded by lush tropical growth on the shore, as we munched on those great sugar donuts.

I couldn’t even remember what “real life” was like.  We sat there talking about what people back home might be doing, trying to remember what it had been like.  I remember thinking how it all seemed as if our past life had been a bad dream…a nightmare.

How could people live like that we wondered?  Why would they?

Many months later, when we returned from that voyage, we stopped to visit our friends and families.  We told stories of our adventures, and had countless “slide parties” where we would recount the adventures, and the misadventures.

As time rolled on the ordeals turned into adventures.  The knockdown in the Aliniuihah Channel went from being a frightening experience to being one of the highlights of our voyage.  As more time passed even fixing a broken head took on magical properties.  The storms that seemed to roll on for days now dwindled in our memories to mere whisps of wind that lasted only an hour or two.  The fear of our first time hitting bottom now became a point of pride.  We’d always chime in with “There are only two types of sailors; those who have gone aground and those who are going to!”

We took off again, and sailed to the “other end” of the Earth.  We visited ancient civilizations, met paupers and princes, dined in great restaurants and at tavernas in harbors that have been in use longer than mankind can remember.

And that voyage too, came to an end.  After years we returned to our home base, and once again the slide shows started, and once again, in the telling, ordeals became great adventures.  Selective memory is a wondrous thing, and before long all we could remember was the dream life we had lived for so many years.  A dream, that’s what it all seemed.

I can still remember the taste of that sugar donut on Tahaa.  I can still feel the grains of sugar caught in my beard, and remember with total clarity the way Jody’s hair gleamed in the surreal light of a tropical paradise, but it does seem more a dream.

And therein lies the truth of the matter.  When you are out there doing it; living and loving life, you think back on your pre-cruising existence, it it all seems just a terrible nightmare.  On the other hand, when you return to reality, what was out there seems more like it was a dream.

So the question arises, why would anyone in their right mind want to live a nightmare?  And the next logical progression of this quandary is, why am I sitting here in a nightmare writing about dreaming?

Now, lemme see, where were those sugar donuts?

Podcast: The Sailing Lifestyle – Do You Want the Dream or Reality?