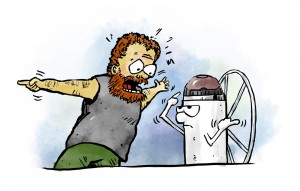 Wrong Bay Bob.  That is what they are calling me (I get no respect!) after a “little mishap” on the New Zealand Share the Sail, the story of which is in this issue.  Yes folks, I did it.  I screwed up!

Oh, it’s not like this is the first time I have done so.  Oh no, I am a pretty frequent screwup.  If they gave frequent screwup mileage, I’d be flying for free in first class all the time.  No, that’s not what I am getting at.  The thing that was bad about this was, I didn’t realize it until well after my mistake had been discovered by a whole bunch of people, and now I have to smile each time the story is retold.

Just so you know what I’m talking about, and so you won’t have to read the silly story to catch up, I shall simplify your life by giving a short recap here.  We were sailing a three boat flotilla out of Opua in the Bay of Islands, and it was raining so hard you couldn’t see the bow of the boat.  I was the lead boat, with Captain Woody and Tania following.  The boats we were on didn’t have GPS, radar or chartplotters, but I’ve been sailing for about 30 years and learned on a square rigger that was similarly equipped.  I trusted my senses.

In order to find our way into a good anchorage, I had to keep ducking below where the chart could be kept dry, and then coming up and trying to match landmarks with islands on the chart.  As we passed a small island, the downpour increased to where there was very little vision.  I was looking for a headland that I was planning to duck behind.  I saw a dark shape looming in the downpour and headed for it.  It seemed to be in the right direction.  Having sailed for so many years, you get “a sense of direction” that very seldom lets you down.  Even in a downpour, with dark clouds and blowing wind, I was sure I knew right where I was heading.

I went the wrong way!

The next day, when the sun had come out and things could be seen, I was asked where we were.  I pointed confidently to a bay on the chart and said, “Right here!”  I was very secure in my mind that that was where we were.  The contour of the bay was real close, and the depths were only slightly off, which I attributed to unfamiliar gauges.

When it was discovered that we were about a quarter mile away from the actual bay I thought I was in, I still didn’t want to admit I was wrong.  I was sure, from the sense of direction that had never let me down before, that I was right, even though all the facts pointed to my error.

A little later that day, after a thorough razzing by everybody on our voyage, plus all the cruisers anchored nearby, I was discussing my assuredness with Tom Brownell, a friend who was on the cruise with me.  Tom has been sailing all of his life and is a third generation boat builder out of Mattapoisette in Buzzards Bay, Massachusetts.  He had the same feeling.

I was sitting, looking at the compass, and saw we were facing north.  My “inner direction finder” was telling me I was facing south.  I asked Tom to point to the north.  Unhesitatingly, he pointed to the south.  I pointed at the compass.  We both felt so strongly about it we wanted to argue with the compass.

And then it hit us simultaneously.  We were unwittingly using our senses, which was what our sense of direction was based on, and for the past ten years we had both been sailing in the northern hemisphere.  Without even thinking about it, our minds were using the fact that, in the north, you get warmer going south.  No matter what time of day, even in a blinding rainstorm, there is always a little more light to the south, and that is what your brain bases your sense of direction on.

Now, I have sailed the southern hemisphere before, but it was always on my own boat after sailing across the equator, and I was able to “adjust” my inner compass over a period of time.  Flying down in an aluminum box at night, there was no adjusting my sense over time.

For the rest of our voyage “down under,” Tom & I had to look at the charts upside down.  It just “didn’t feel right” when we’d turn them right side up.  We were down there three weeks, and the feeling never changed.

The moral of this story?  Hell, there is none.  I guess I was just trying to justify my unwanted new nickname; “Wrong Bay Bob.”

Vintage Attitude – There You Are