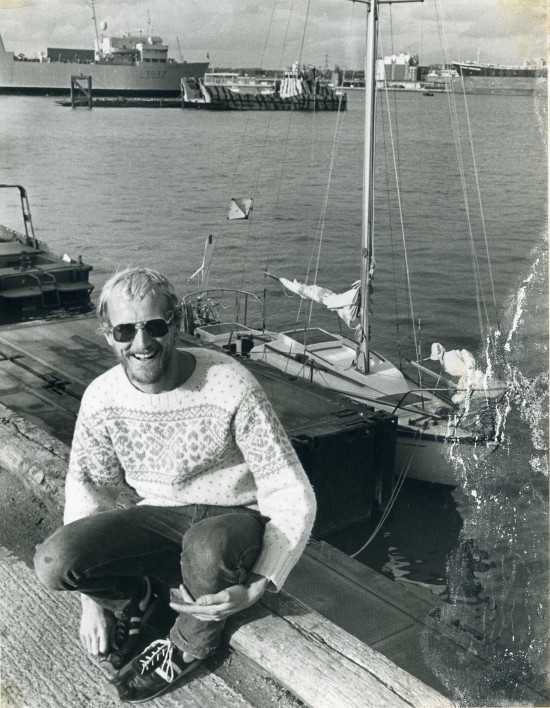 Last month whilst on holiday I visited Kings Lynn where my old man came from which brought back many happy memories. Happy to remember my genius of a father! Lynn’s a lovely medieval town in Norfolk on the Wash; the land is as flat as a pancake, meaning the sea goes out for miles with plenty of mud. Whilst taking a few photos of the place I was surprised to spot a tiny craft I’d become quite intimate with over forty years ago…

Job’s weren’t that easy to come by in Margaret Thatcher’s Britain during the eighties for anybody; let alone yachtsmen! Politically it was a big struggle between the left and the right. I  spent most of my time away at sea racing yachts whilst based in Southampton with my NZ girlfriend. This was just before yacht racing became sponsored and professionally crewed in UK. Despite very good expenses; any poor results meant finding work in a job on land too…

Life changed suddenly, hit by a double whammy. Ending a seven year relationship with my lady from ‘Clutha; and job redundancy. Very lucky to find work as a civilian for the MOD. Operating and maintaining a multitude of diving craft for an elite unit the Royal Engineer Diving Establishment (REDE) at Marchwood; just opposite Southampton on the River Test.

Having bought a fine 22ft. GRP yacht. I’d planned to take her farther afield. The new job didn’t pay much but had potential as a wonderful base (free mooring, refit and gear etc.) to continue this idea.

Doubly fortunate to find a great place to live sharing a house (including swimming pool!) with four folk next to the church in Eling Basin. From where it was possible to cycle to work; essential now in my saddened, poorer, single life!

Shortly after my job at REDE began the unit was issued with a more sophisticated boat. This had 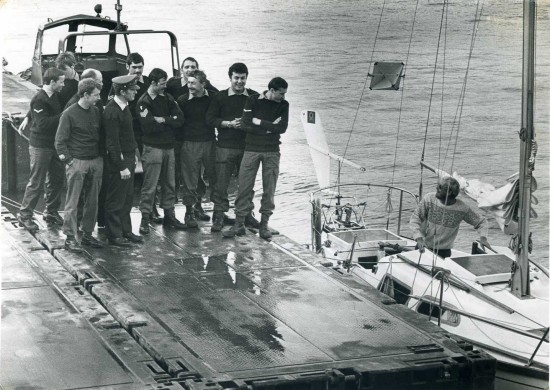 been developed by the MOD for an RE combat role of fast river bridging. The new boat (CSB) was built of Aluminium about 22ft long, with a flat nose to push, as well as tow. Powered by twin 215 HP turbo diesel engines that drove the Dowty water jets and designed to plane. It was possible to operate in thin water…

I was immediately sent on a course at Wyke Regis to learn how to use and maintain this bit of kit. This fast craft proved very popular for diver training allowing us to find interesting new sites further afield.

Trouble only reared its head for my boss Mr. Richmond (time served ex-Sapper!) from an overbearing MOD technical interest. Having forgotten all about stultifying military life (despite time in the army in EOD as an Ammo Tech with the rag and oil company). I’d quite naturally anti-fouled the boat, because we kept her afloat in salt water.

Two old boffins from the Military Vehicles Engineering Establishment (MVEE) at Christchurch came to see what had been done. They decided after a week, that red anti-foul hadn’t damaged the boat (but it needed to be black for discreetness!).

This was all prioritised. MOD and the builder’s Fairy Marine were on the cusp of signing an important new contract…selling the first of 300 of these craft to US Marine Corps.

My boss and I struck up a relationship with these fellows. One of them Trevor realised I’d been the first to use the craft in rough salt water. The upshot being I was invited down to MVEE for a few days to operate their prototype boat. We were testing limitations on using the boat offshore.

Unlike REDE’s production boat, MVEE’s CSB engines hadn’t been governed. It could do about double the speed! We had a few interesting days in the bay testing the boat in roughish water. Then I noticed that none of them were that keen to come out with me; when we decided to try and roll one. The tidal over falls over the Christchurch Ledge made this to happen at high speed.

Unfortunately, the cab’s plastic windows folded in and hit me. Thank goodness the whole cab assembly didn’t break away; it could have taken my head off. My own ignorance hadn’t informed me of the large forces involved rolling at over thirty knots (we’d secured everything including the big engine and jet  hatches). 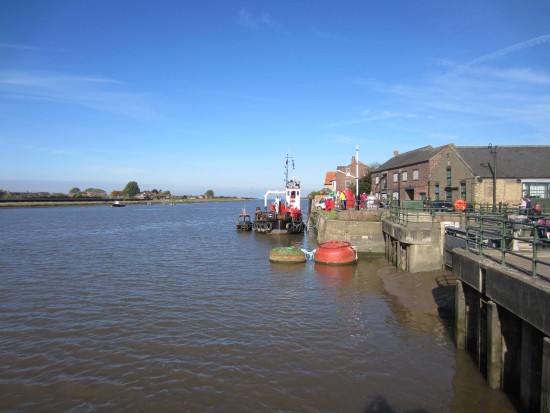 After being picked out of the water by MVEE etc. in the standby boat. I felt bruised, wet, cold and very shaken…lucky to be alive! Whilst Trevor was extremely pleased that the CSB took it better than me. Suffering only superficial damage; his bottom line was that in wartime this boat would still work!

Next day we did it again with the cab off. This time it went slightly better, if that’s possible! Now though, I was scared! We tried with a different CSB constrained to ‘issue HP’ and about 22 knots. This boat didn’t roll! Or maybe I didn’t try as hard…which completed our tests.

We Brit’s must lack imagination! An American Marine managed to roll a CSB shortly after they’d bought the first 300. Apparently he did it, by slamming one of jet drives lever’s back into reverse, whilst turning at full throttle whilst on the plane. All Marines are reasonably ‘Gung Ho’; you also need to be reasonably strong to do this!

This slightly damaged one of the Dowty water jets. But it didn’t blow off its bucket completely! It was too well designed!! Meaning another slight MVEE design tweak was needed…in slight mitigation I guess it never entered any of our minds; that anyone would be silly enough to operate the boat in this way.

I remember what another Yank’s imagination achieved suddenly reversing the nozzles; when they started flying the ‘Harrier Jump Jet’!

During ‘82 REDE became involved work diving on the ‘Mary Rose’ at Spit Sand where she lay on the bottom between 14-18 metres (depending on the tide) just outside Portsmouth. Alexander MacKee had found her in 1971…his own six year odyssey. It was quite a long way from our base at Marchwood but our boss POM Chitty volunteered our services. The new CSB was  ideal..

The first time we came alongside the salvage vessel ‘Sleipner’ to help was slightly confusing. Working on the wreck was huge team of divers, archaeologists and scientists, so many volunteers and professionals. But with no dictator to run day by day activities!

The whole project was led by Margaret Rule (chief marine archaeologist), she had the unenviable task in making sure that no damage was done to any of the wonderful artefacts immerging, or the wreck. Many were beautifully preserved in the mud (a perfect slice of life from 450 years ago of Henry VIII’s flagship!).

When I first dived on the site; only then did I begin to understand the multitude of problems. Visibility was mostly only a metre at best. It was very busy place with a grid of yellow pipes placed around the wreck and a myriad of people down there!

This lack of a practical daytime boss meant there was often conflict with the teams working on the wreck! Most of the volunteer and professional divers including our ‘sappers’ were employed air lifting mud to clear the wreck itself.

A committee of four including Margaret and Alexander had been set up to try and raise her. Obviously the archaeologists were worried about damage to any bits of mud; they might contain anything! I saw a complete leather jerkin (archers complete with his ribs and his bone comb!), many arrows in boxes or pieces of pottery/bones/jewellery etc. come aboard!

Prince Charles had become very interested in the project. He dived a couple of times on the site whilst we were there. I was quite pleased quite to see he was human! (He came up with a giant ‘bogey hanging; from his nose on one dive!).To be fair Charles had already done a great deal in helping to bring more profile, money etc onto the project.

REDE was issued with another CSB and we operated two of them out of the Camber with our accommodation at HMS Vernon. Then MOD decided they wouldn’t pay me overtime which had accumulated rather well during the first few months. Op. Corporate had also started and I was busy trying to train, repair and issue kit for lads going the Falklands War. Only becoming slightly involved again when Fred Davis rolled one of the CSB’s entering Pompey and it was captured on the news and TV (the ebb was running hard in a southerly!).

Finally a purpose built frame was built to lift the wreck off the seabed supported by four tubular steel legs. Steel bolts were used at selected points attached to wires at the strongest parts of the hull. The ‘Rose’ was then slightly raised by hydraulic jacks very gently from the suction grip of the mire! Once hanging from the frame the wreck was slowly transferred (still underwater) into a big cradle by ‘Tog Mor’ (a giant floating crane lent from the North Sea); cushioning from air bags prevented any damage here. Finally ‘Tog Mor’ lifted the whole thing (now weighing 570 tonnes) onto a barge and she was towed ashore.

The whole operation was televised on Beeb 2; our retiring boss (Lt. Col) P.O.M. Chitty was offered a job by the corporation because he’d been such a good fill in man. When nothing was actually happening above ground during this delicate lift and transfer and it took many hours. Pom could keep an audience amused just like Johner’s or Arlott on the cricket!

Pom was a fantastic character; the most memorable words he ever said to me were in his final weeks as CO at REDE. We watching the ‘White Whale’ (‘Canberra’) dock when the surviving boys came home from Margaret’s war. Hundreds of well wishers were on the quay right opposite us on the Test. (Pom was part of P & O, being on the board of directors!).

“Just look at that notice I’ve organised on Canberra John” said POM… P & O cruises where Cunard doesn’t dare. It’s an insider’s joke because the ‘QE2’ wasn’t risked to be sunk during this small war, whilst ‘Canberra’ sat in bomb alley for several weeks. Becoming a well loved symbol of the whole armada.

I left REDE in ‘83 with some wonderful memories of the people, then sailed a solo Atlantic circuit on my engineless 22ft’er…