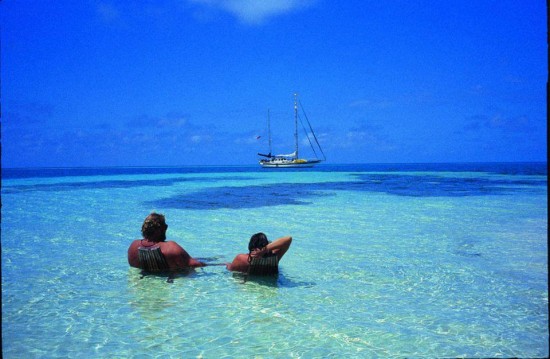 I woke up to the tinkling of water against the hull of the Lost Soul, and as I came out of my stupor I remembered where I was.  Anchored in Pago Pago, American Samoa.  We’d been there about a week, and were planning on leaving in a few days. I pulled on my shorts and walked out of my aft cabin into the galley and threw on a pot of coffee.  While I waited for it to brew I went up onto the deck to see what kind of day I could expect.  The sun was shinning and it was hot.  A typical day in the tropics.

As I surveyed my surroundings I saw a new boat had come in during the night.  Did I say boat?  More like a dream.  She sat at anchor a few hundred yards from where I was.  A traditional sailing ketch, but larger than any I had ever seen.  A hundred and forty feet on deck.  A beautiful dark blue hull etched with gold leaf.  The brass work was blinding and the varnish was pretty much the same.  Wow!  What a dream boat.  I wanted it.  She was on her maiden voyage out of New Zealand.  Her little-sister ship was Signe, which I had lusted after a few years earlier.

A few years later I learned that her state-of-the-art carbon fiber masts had broken off shortly after our encounter in Samoa, and she had been laid up in the yard a long time for a re-fit.  This happened while I was on my way to Tonga, on my trusty old boat.

When we were leaving Tonga a few weeks later, we stopped in Niuitapatupo, the northernmost Tongan Islands.  While there we ran into some folks that were trying to raise a schooner that had sunk in the channel a few months earlier.  It turns out that the boat they were trying to raise was Golden Dawn, a 103’ three masted schooner that I had tried to buy just before I found the Lost Soul, and wanted so bad I could taste it, but was unable to afford it.  Now she lay on the bottom, off a remote island in the south Pacific, while I sailed my trusty old boat away and into the sunset.

Over the ensuing years, as I cruised the world, there were many times when I would see something that I “just had to have.”  But somehow I didn’t get these things.  And after awhile I learned from these experiences something that has made my life a whole lot easier.

Back in my “buy everything” days, when I had a house and a garage, I just had to have all the “stuff.”  A better car, a bigger TV, a louder stereo, the latest clothes, the fastest motorcycle, and of course, the biggest boat.  After moving aboard, over 25 years ago, I realized just what all that crap was worth.  Ziltch! For over fifteen years I stored it in a garage, while I sailed the world.  After returning to that garage a few years ago I had a huge garage sale.  I realized none of that stuff had any meaning.  Oh, yeah, there were a ton of photos I kept, and the first printings of the books I’ve written, and copies of the hundreds of magazines I wrote for; but in all, nothing else meant anything anymore.

To put this into a vernacular that all can understand, it’s kinda like dating.  When you find someone who fits into your lifestyle and becomes a part of your life, you opt for a long-term relationship.  Yeah, you’ll see a sleek beauty now and then and appreciate her form and beauty, but that doesn’t mean you have to own ‘em all.  You are much happier with your life if you find the right one, and enjoy her to the fullest, while watching the others sail by.

I learned to relate that lesson to boats.  Yeah, there are eye-popping models out there, and when I see them I appreciate what I see.  Many are sleeker than the Lost Soul.  Most are faster, all have something that I like, because I appreciate boats.  But I have an attachment to my boat.  When I approach her from shore I feel a swelling inside when I first spot her.  When I am aboard I love the way she feels.  I know every flaw, and have learned to not only live with them, but they have become a part of what makes her special.

I have learned a very important lesson from all of this.  I am happy with my boat.  I appreciate every flaw and nuance, every leak and every imperfect line.  Even when I see a newer style sail by, I feel a comfort with what I have.

It is far more important to want the things that you have, then to get the things you want!

Podcast: The Sailing Lifestyle – Do You Want the Dream or Reality?