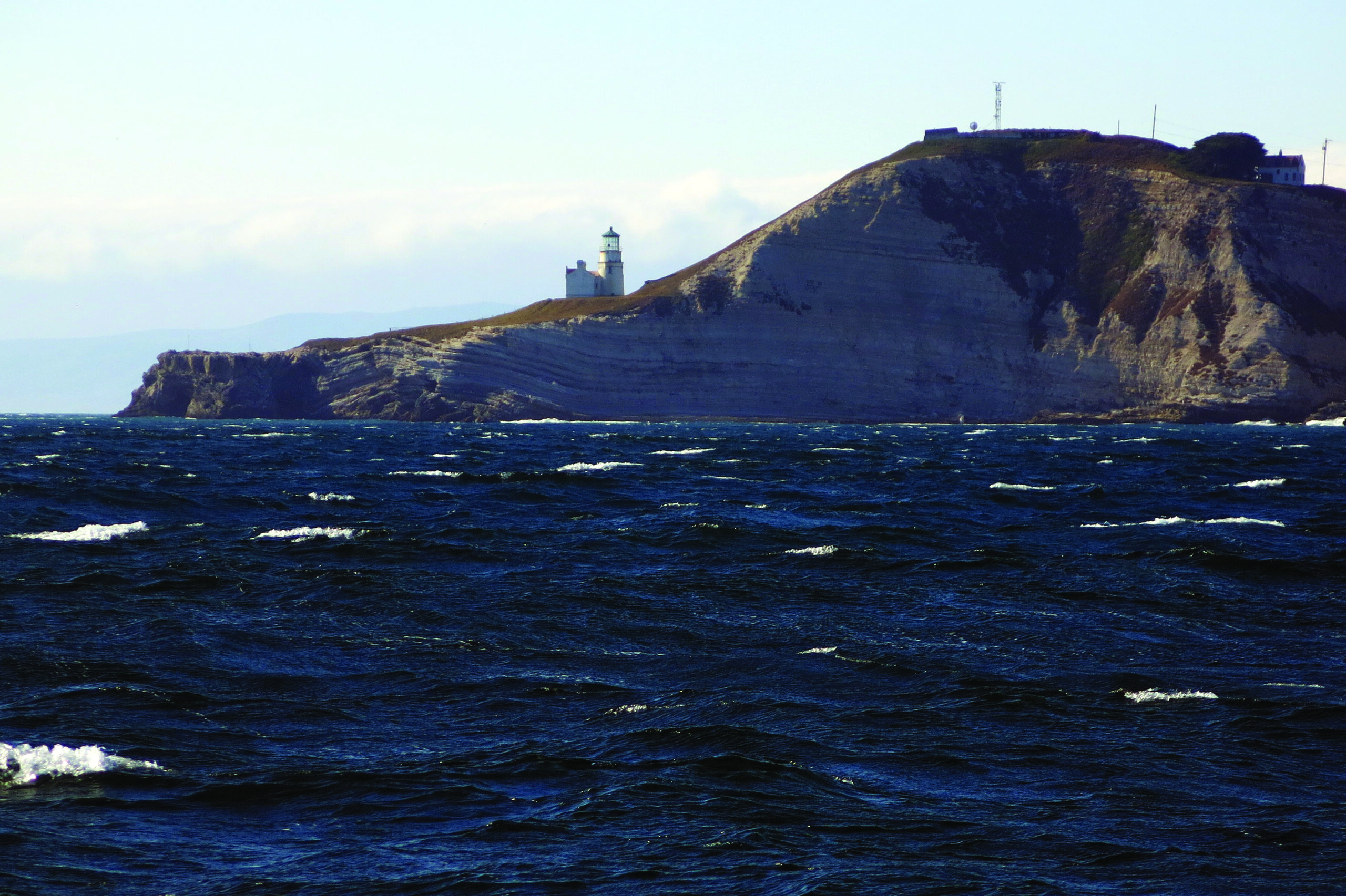 Cruising on the California coast in the long, lazy days of late summer was extremely satisfying. The bays and harbors are well located for comfortable day sailing and slow-paced mornings segue into exhilarating afternoons galloping ahead of the sea breeze to reach the next anchorage by sundown.

As we sailed southwards aboard our Liberty 458 sloop, Distant Drummer, we sought out attractions to amuse even the most seasoned cruiser; nature and history provide a wealth of interesting places to explore, the cities are teeming with shopping, and there is a plethora of sights to see from fun parks to film studios.

While cruising in California, I was captivated by the tales of R.H. Dana who spent two years aboard a Boston brig loading hides between San Francisco and San Diego. His memoir “Two Years Before the Mast” provided an intriguing cruising guide and it was interesting to compare the passage of today with his voyage nearly two hundred years ago.

We had been in the San Francisco Bay area for six weeks and had explored most of its nooks and crannies. We had cruised up the delta, hung out around the Bay, and sailed under the Golden Gate Bridge enough times to finally catch it naked without its habitual foggy shroud. As we passed under the Gate for the final time, we were graced by a pair of humpback whales. It was fantastic to watch them surfacing and breaching so close to the entrance to the bay.

The passage from San Francisco to Monterey was a leisurely three day cruise, motor-sailing in the gentle morning breeze until a brisk northwesterly filled in during the early afternoon. The first night we tucked in behind the breakwater at Half Moon Bay and stopped for the second night at Santa Cruz. We dropped the pick on the east side of the pier, slap-bang in front of the world-famous Santa Cruz Boardwalk. As an aficionado of fairground kitsch, I rushed ashore to revel in all the fun of the fair. Later, as we tried to sleep, it was not the throbbing music and screams from the amusement park that kept us awake, but the raucous barking and snorting from the sea lion colony beneath the pier.

Crossing the bay to Monterey on a crisp blue-sky day with a 20kt breeze on the starboard quarter was magical sailing; we were almost sorry to arrive at the harbor. A mooring field occupies the area to the west of Fisherman’s Wharf, so we anchored on the east side and settled in for a calm, clear night. Monterey Harbor is one of the few anchorages which is exposed to winds from the north, but luckily the wind had backed to the southwest and we were protected behind Point Pinos.

Back in the early-1800s, Monterey was the seat of the Spanish government and boasted the only customhouse on the California coast. With the huge demand for canned sardines during WW1, Monterey mushroomed, but the old Custom House can still be found standing in the Presidio by the wharf. We sauntered along Cannery Row past the clapboard canning factories which have been renovated and transformed into fashionable shops and restaurants. The town was lively with summer tourists, but we saw no sign of the “cock-fighting, gambling of all sorts, fandangos, and every kind of amusement and knavery” that Dana reported… a shame really, it sounded like fun!

Heading south from Monterey we had a boisterous overnight passage around Point Sur with a 2m swell and the wind gusting over 40kts on the starboard beam. At sunrise, we noticed that a seam close to the top of the mainsail had split so we decided to stop in Morro Bay to repair it. We slipped through the channel between the sand spit and sugar loaf peak of Morro Rock and thankfully dropped the pick in the anchorage area opposite the old power plant. A colony of sea otters lives in Morro Bay and they are constantly diving and feeding, playing and nursing their fluffy pups in the tranquil water of the bay. Watching their antics provided a perfect distraction as I sat in a billow of canvas stitching the mainsail.

Point Conception is a cape with an unhealthy reputation for strong winds and rough water; Dana reported “gales, swept decks [and the] topmast carried away.” We were somewhat luckier and enjoyed a beautiful sail from Morro Bay to Santa Barbara in a 15-20kt breeze with a full gib and two reefs in the newly-stitched mainsail. We stopped overnight in Cojo anchorage, a small cove which shelters behind Point Conception and has a great view of the lighthouse. It is one of the oldest lighthouses on the California coast but is rarely visited as land access is restricted by the military and by a private ranch, so only yachties get to see it!

A Special Christmas Present For Stephane…