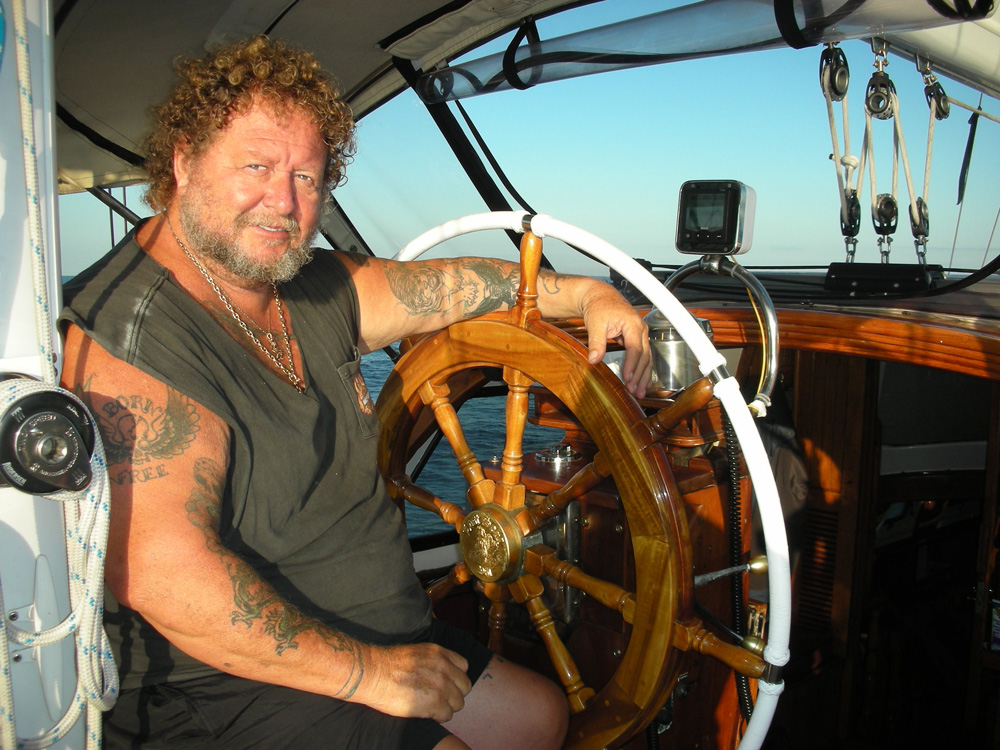 Motorcycles, boats & adventure created Bob Bitchin in the early 1960’s.  He’d been “created” (born?) before, actually in 1944 in Los Angeles under the name Robert Lipkin, but his sense of adventure and a brief encounter with Tommy Chong of the comedy team Cheech & Chong changed his name to Bob Bitchin, and he rode all over the world and wrote hundreds of articles under that name, as well as a number of books.

Famous motorcycle daredevil Evil Knievel needed a traveling companion and body-guard, and when they met in Hollywood in 1973 Bob took on that job until the Snake River Canyon Jump when Knievel retired.  After that Bob created “Cycle Expo” in 1974 at the Los Angeles Convention Center.  At that time it was the largest motorcycle show in the world.

He went on to create Biker Magazine and Tattoo Magazine in the 70’s and early 80’s. He also worked as editor of many of the motorcycle magazines of that era including Big Bike, Choppers and Chopper Guide, and wrote for other publications as diverse as Forbes, Penthouse and New Look.

The difference between an adventure and an ordeal is attitude.

In those years he rode his motorcycles across the country over 30 times, and around Europe as well. He helped found, and was elected the first President of the Motorcycle Press Association in 1978 and he co-founded A.B.A.T.E., a national organization of motorcyclists.

He and riding partner LACO Bob Lawrence, President of the Los Angeles Chapter of the Hells Angels co-created the very first Toy run in December of 1973, which now takes place in thousands of cities world-wide.

He taught himself to sail on a Cal 28 sloop and found the sailing lifestyle fit him to a “T”.  He met Alan Olson, Captain of Stone Witch, which was a 74′ square rigged topsail schooner that sailed out of San Francisco. He signed on for a 3 month sail to Guatemala to see if the sailing life was for him. Stone Witch was the flag-ship for GreenPeace, and had no engine, ran kerosene running lights, and had four 21′ oars for propulsion. His life was changed forever, and soon, while riding all over the world on Harley’s, he lived aboard various sailboats that he would buy, fix up, and sell. For over thirty five years he lived aboard sailboats and cruised most of the Pacific and Central America.

He sold BIKER and TATTOO magazines to Easyriders in 1986 and started sailing full time. For many years he sailed the Pacific Coast of Mexico and Central America on his Formosa 51, the first Lost Soul, and then on another 51′ ketch, named Predator, with numerous trips to the Hawaiian Islands and back. Then, in 1990 After fixing and selling seven boats he bought the 68′ staysail ketch Lost Soul and this would be his home for the next 17 years.

He kidnapped Jody, the bartender at the Portofino Marina Yacht Club, and they took off to explore the South Pacific. As it turns out, they cruised all over the South Pacific, and then sailed through the Panama Canal to the Atlantic, sailed the Med, the Caribbean and everywhere they ever dreamed of going. They were married on board Lost Soul at the Portofino Marina on their return from their world voyage.

In 1996 he created the magazine Latitudes & Attitudes. In the 15 years L&A was published it became one of the largest and most authoritative publications on sailing and world cruising.

In 2005, along with Darren O’Brien, he created the television show Latitudes & Attitudes, which, at the time, was the only nationally televised show about the sailing lifestyle. The show aired 5 seasons nationally with 65 episodes and is still in syndication world-wide.

In 2012 he and Jody decided to sell Latitudes & Attitudes & retire, to go cruise the world again.

Unfortunately the buyers turned out to be a bit less than honest, and in just six months they lost everything, and were forced into bankruptcy.

But all was not lost.  Almost 900 of their L&A Readers sent in $250 each, to become founders of a new publication for Bob.  Cruising Outpost, which is now the #1 selling maritime lifestyle publication in the USA.

Bob now divides his time between publishing, writing, world cruising, Riding his Harley and doing seminars on sailing and writing novels. He has written eight books: His newest, DORF (released March of 2018), as well as Biker To Sailor, Letters From The Lost Soul, The Sailing Life, Brotherhood of Outlaws, BIKER, Emerald Bay, King Harbor and Starboard Attitude.

Bob has two children, six grandchildren and 3 great-grandchildren and still rides and sails all over the world whenever he gets the chance. He and his wife Jody live in the Sierra Nevada mountains, between the middle and north forks of the Feather River, overlooking Lake Oroville, in Berry Creek, California.